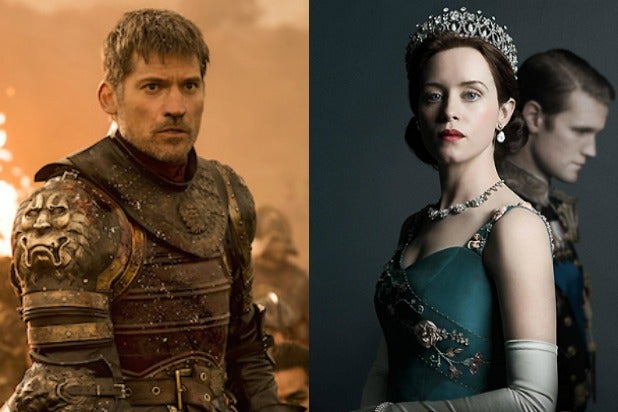 The two platforms jockeyed for the lead all night, with the Outstanding Drama Series category (which was claimed by “Game of Thrones”) being the one that left HBO and Netflix neck-and-neck.

“Game of Thrones,” led the series race with nine wins, “Saturday Night Live” and “The Marvelous Mrs. Maisel” tied for second with eight, and “The Assassination of Gianni Versace: American Crime Story” came in fourth place with seven awards.

Netflix began to dominate the Emmys conversation back in July when, for the first time ever, the streamer surpassed HBO to grab 112 nominations and break the premium cable channel’s 17-year streak of being the most-nominated network.

Behind the two first-place winners was NBC with 16 statues. The broadcaster’s third place slot comes by way of programs like “Saturday Night Live” and “Jesus Christ Superstar Live in Concert,” starring John Legend.

FX took fourth place among the networks and streamers with 12 wins. And while Ryan Murphy’s limited series “The Assassination of Gianni Versace: American Crime Story” dominated its categories for the cabler (including Outstanding Limited Series), the final season of “The Americans” grabbed a couple prizes, as did Donald Glover’s comedy “Atlanta,” which was largely shutout after several big wins in 2017.

Hulu left with four awards, with less love this year for the streamer’s big 2017 winner, “The Handmaid’s Tale.” The drama grabbed three prizes this year, all handed out earlier this month at the Creative Arts awards.

See the complete list of winners here and the breakdown by show and network below.

The Best and Worst Moments of the 70th Emmy Awards (Photos)

From the opening number to acceptance speeches — and a proposal!

With the 2018 Emmy Awards well under way, here are some of the highs and lows of this year's awards show.