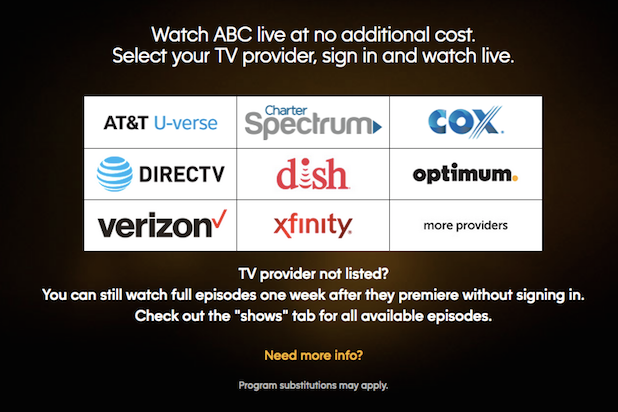 emmy livestream how to stream the emmys abc

Maybe you’re a cord-cutter and your antenna isn’t getting ABC, or you’re not near a TV set and you still want to see whether “Game of Thrones” wins all the awards it’s up for tonight. Whatever the case, here are all the ways to legally stream the 68th Annual Emmy Awards, which start at 8/7c on ABC, though ABC’s red carpet coverage begins at 7/6c.

Customers of the following pay-TV companies, or people who have taken their parents’ login, can simply go to ABC.com, or log in to the ABC app on their chosen device:

The ABC app is available on Apple and Android devices, including Apple TV.

There are also a bunch of smaller-scale cable providers that allow you to stream ABC live, so check the full list if you don’t subscribe to one of the large-scale companies.

If you don’t have a cable login, you are, unfortunately, out of luck this Emmys evening, unless you subscribe to PlayStation Vue, which does include live ABC in its TV-over-the-internet package.

For those looking for more Emmys red carpet shenanigans, E! is streaming its coverage on eonline.com — though beware, E!’s online player doesn’t play nice with Firefox.