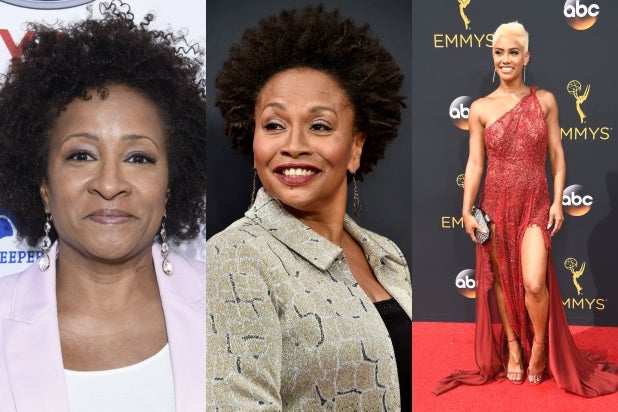 Emmys red carpet coverage is always good for at least a couple of full-body cringes, and Sunday was no exception. E! News correspondent Sibley Scoles said, “I love you Wanda,” to a black actress behind her who was, in fact, Jenifer Lewis, and not Wanda Sykes.

“I’m Jenifer Lewis,” Lewis said magnanimously. “I look like her.”

After what may have been an attempt to alleviate the awkwardness with a humorous “Jennifer Lawrence?”, Scoles looked like she wished the earth would open at her feet and swallow her up.

Scoles, who is black herself and said she is frequently mistaken for Amber Rose, took to Twitter to express her mortification later in the evening. She said she heard a voice she thought was Sykes’, only to turn around and discover she was actually declaring her love for the woman currently playing Anthony Anderson‘s mother on ABC’s “Black-ish.”

(Sykes also pops up on “Black-ish,” but she plays Dre’s boss.)

Omg I’ll be honest .. i thought it was wonda from her voice … then I looked and wanted to hide in a cave

Scoles had a rough night. She also mistakenly referred to Sept. 13 as Tupac’s birthday — it’s the date of his death — and took some heat for that from Twitter.

Also Read: Diversity Wins at the Emmys After #OscarsSoWhite

“I am dying inside & out! Never speaking again! HAHAHAHA” she tweeted.

Watch video of the gaffe below: