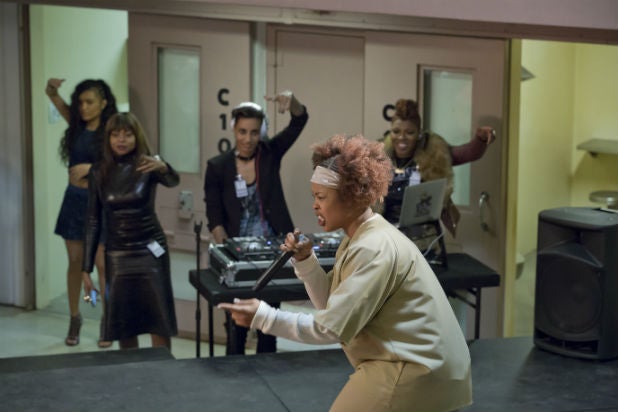 “Empire” guest star and platinum-selling recording artist Da Brat was put at ease in her acting scenes on the show’s midseason by working with Taraji P. Henson.

“Taraji, she is everything,” Da Brat — whose real name is Shawntae Harris — told TheWrap, “She is an amazing actress. She just made it so comfortable. She put me in the perfect mood and setting. Because when I rehearsed my lines, I probably put too much on it at first. When I got in there with her, I calmed it down and it was like having a conversation.”

Harris first met “Empire” co-creator Lee Daniels years ago through mutual friend Mariah Carey. During the show’s first season, Harris sent Daniels a message on Instagram asking to be on the show.

“[Daniels] probably hit me back this October,” she said with a laugh. “And he was like, ‘Where are you, girl?’ And he had called my phone by then and he was like, ‘Brat, this is Lee Daniels. We’re trying to find you!'”

In the episode, Harris will play Jezzy, one of Cookie’s friends from prison whom Cookie goes to visit on the inside. But while she plays a prisoner, Harris did rap on camera — though viewers might not get a chance to see it.

“In my performance scene, which I believe is going to be cut out, the cameras–we did it so many times, because the director, Sanaa Hamri, she wanted to get all kinds of angles and shots,” she said. “So the cameraman was like literally in my face so much that I think I hit my teeth on the lens.”