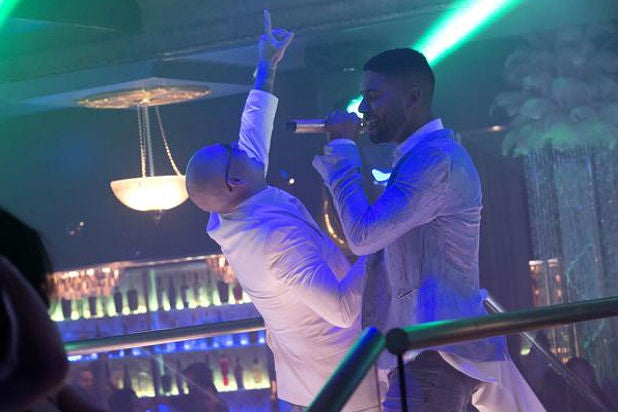 Lucious Lyon had a welcome home party fit for a hip-hop king on the latest episode of Fox’s hit series, “Empire.”

However, Lucious’ estranged wife Cookie (Taraji P. Henson) wasn’t going to be upstaged — even by her own son — and had Hakeem (Bryshere Y. Gray) storm the stage to perform his new song from rival label Lyon Dynasty with another famous guest star, legendary producer Timbaland.

“You put it down like you did tonight, you can have your own stage in Miami,” Pitbull, a.k.a. Mr. Worldwide, told gold-clad Cookie after the impressive performance of “Bout to Blow,” which was co-written by Timbaland and Gray.

Cookie also kept the drama level high during a plate-smashing dinner scene in which she literally turned the tables on Lucious by pulling off the runner and catapulting a fine spread of food onto the floor.

“I’m always gonna eat. Just not with you,” she tells her ex when he demands that she dismantle her new label.

“I would say Lucious wasted no time when he finally made bail to come out swinging at everyone who wronged him,” series co-creator and executive producer Danny Strong told TheWrap before Episode 3 aired.

The family patriarch went on to crush Hakeem and Cookie’s plan to break out their new Latina girl group by not only buying out the radio station that was going to feature them, but by signing away lead singer Valentina (guest star Becky G).