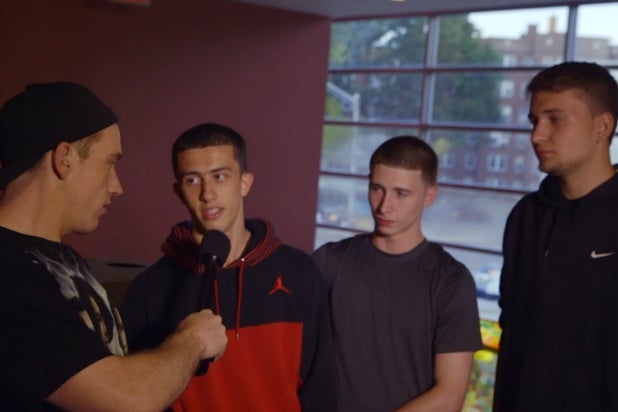 Seth Meyers sent one of his “Late Night” contributors to Queens Boulevard to talk the “Entourage” movie with its core demo — apparently not the brightest bunch.

The reporter, named Jeremy, went undercover as a “bro” to bond with a group of ITT Technical Institute students. When Jeremy recommended they drop out to watch “Entourage” full time, the group’s leader replied: “I’m sorta wit that.”

The fellas also bonded over drinking 40-ounce beers and smashing the empty bottles on the rocks. So, there’s that.

Evidently though, there is more to life than “Entourage” — even for superfans. Meyers’ field correspondent found out that other movies were actually playing at the movie theater too, and took in “Pitch Perfect 2,” “Aloha” and “Woman in Gold.”

“Damn, ‘Pitch Perfect 2’ was good as hell,” Jeremy said, also finding things to love in the other non-bro films too. That scared the hell out of the New York City correspondent, who thought he knew himself.

Fortunately, a framed photo of Adrien Grenier came to life and helped calm the comic’s mind, assuring him that it’s all going to be OK — so long as there’s a sequel from Vinnie Chase, Johnny Drama, Ari, Turtle and E, that is.

Life is a party for both the characters and the cast of the upcoming "Entourage" movie. The stars of the HBO spin-off hit the red carpet at the WestwoodÂ Regency Village Theatre in Los AnglesÂ on Monday night for the premiere of the comedy and appeared to have just as much fun in real life as they do on set. Adrian Grenier, Kevin Dillon, Jeremy Piven,Â Jerry Ferrara and Rex Lee all hammed it up for the cameras at the star-filled premiereÂ for the filmÂ that lands in theaters on Wednesday, June 3.