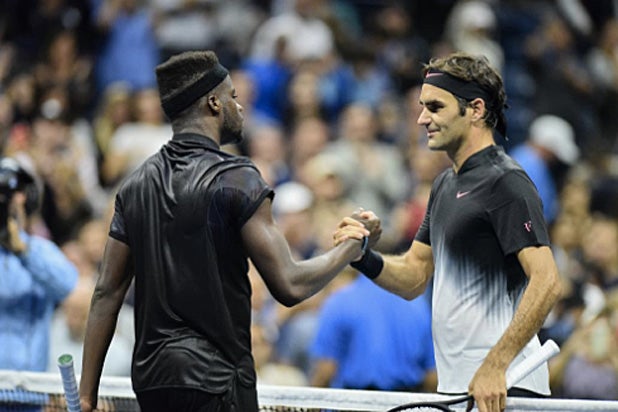 Roger Federer was expected to breeze through the first round of the U.S. Open on Tuesday night, but American newcomer Frances Tiafoe had other ideas.

The 19-year-old took the third seed favorite through a challenging five-set battle at Arthur Ashe Stadium in New York, before Federer finally held him off.

While the eight-time Wimbledon champion survived to advance to the next round, it was Tiafoe who had both the crowd and social media on its feed applauding him.

“Many call Tiafoe the future of American tennis. Deservedly so tonight!” one Twitter user wrote.

“Tiafoe is the future we deserve,” said another.

Originally from Maryland and the son of immigrants from Sierra Leone, Tiafoe now lives and in Boca Raton, Florida. He is ranked 70th in the world and has never been past the second round at a Grand Slam tournament.

Following his 4-6, 6-2, 6-1, 1-6, 6-4 win over Tiafoe, 36-year-old Federer will now face the winner of the match between Mikhail Youzhny and Blaz Kavcic, which was postponed due to Tuesday, ESPN reported.

See the Twitter frenzy about the epic match below.

Tiafoe is the future we deserve! #usopen

Many call Tiafoe the future of American tennis. Deservedly so tonight! No USA men's singles titles since Andy Roddick almost 15 years ago.

This is true. I was saying earlier I hoped Tiafoe would win at least one set. He won two. He should be proud. He played well

Tiafoe was electric tonight. Reminded me of when my eyes were opened by Zverev and Theim earlier this year. Bright futures.

Tiafoe gained a lot of fans with his performance and poise tonight…excited to see him play and build on this in future slams.

This also seems like the ideal time to re-read Frances Tiafoe's @PlayersTribune story from yesterday. https://t.co/2RbGhkSBF2

????Roger Federer GOAT never count him out but too early on the tournament for 5 sets…my heart. Tiafoe amazing the new generation is coming ????

These first few days of the #Usopen2017 have been surprisingly fun. Sure Fed wasn't exactly himself. But Tiafoe battled til the end.

American sports fans are so uninformed. Tiafoe has been here for a few years. Now bc of this you are all woke?? PAY ATTENTION

The 2017 U.S. Open kicked off Monday in Queens, New York, and some of the biggest sports fans from Hollywood and media came out to mark the occasion.