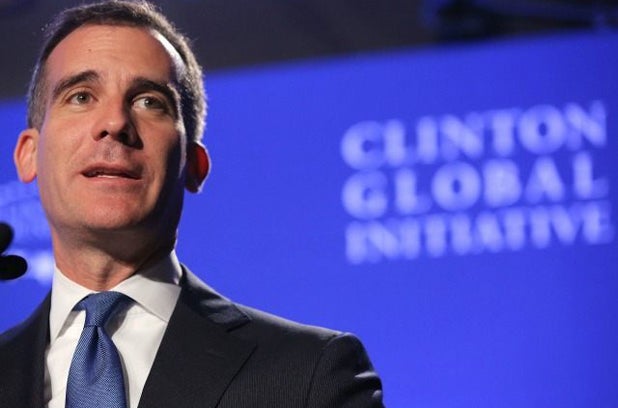 Far outpacing his opponents, Eric Garcetti has been reelected tonight for a second term as mayor of Los Angeles.

With only 5 percent of the vote counted, CBS Los Angeles declared Garcetti the clear winner among 11 candidates total on Tuesday night, with 81 percent of counted votes.

“Thank you for giving me the honor of being your mayor for another term,” Garcetti said to supporters late Tuesday evening.

Garcetti is the son of former District Attorney Gil Garcetti, best known for serving in role during the trial of O.J. Simpson. During his first term, he spearheaded L.A.’s bid to host the 2024 summer Olympics, as well as a large expansion of the city’s public transit infrastructure, and an initiative to provide housing for the homeless.

However, in the weeks just prior to tonight’s election, Garcetti faced increased criticism by immigrants’ rights activists, in particular for a perceived refusal to declare Los Angeles a sanctuary city — meaning, a city that does not cooperate with federal immigration authorities. Garcetti sought to counter that perception, highlighting the city’s efforts on behalf of immigrants, arguing there is no legal definition of “sanctuary city” in the first place. Garcetti also publicly spoke against the Trump immigration ban.

Garcetti remained popular throughout the city however, particularly within the film industry due to his support for the California film tax credit. Garcetti was among those who pushed for the credit’s 2014 expansion to $330 million per year, and in February during a campaign stop at Raleigh Studios, Garcetti called for the program to be expanded by “hundreds of millions of dollars more” when the current credit expires in 2020.