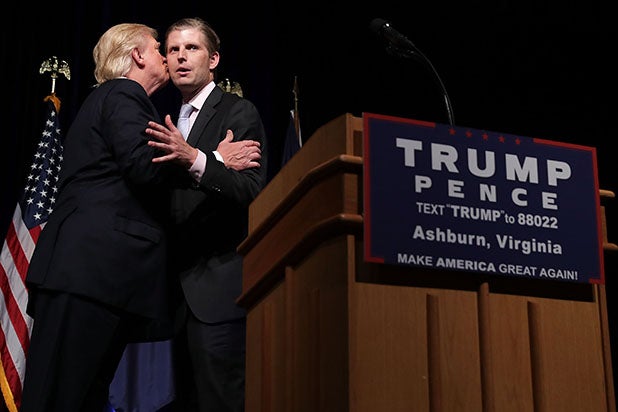 Eric Trump got a rough reception when he was out in New York City last week following the shocking election results — by people who aren’t even old enough to vote.

The 32-year-old son of President-elect Donald Trump and his wife, Lara Yunaska, were leaving Quality Italian restaurant on 57th Street in Manhattan when they were heckled by a group of teenagers, the New York Post reported.

After dining with friends to celebrate the GOP candidate’s surprise victory, the couple were crossing the street when eight teenagers yelled, “Eric, f— your father!”

Another young protester then shouted the now-popular slogan “Love Trumps Hate,” according to the Post.

Eric and Lara reportedly walked away swiftly without responding.

While his father has countless haters, Eric has also received plenty of criticism in recent months.

From taking a selfie while filling out his election ballot and not knowing which state Mike Pence governs, to posting a photo with a cheetah he killed game hunting, the Trump scion is getting his fair share of the media spotlight — and not in a good way.