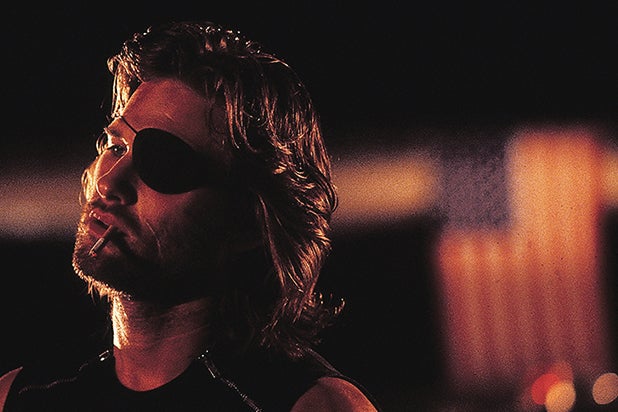 (Spoiler alert: Don’t read this if you don’t want to know any plot details about the remake of “Escape From New York.”)

In the new “Escape From New York,” New York City won’t be a maximum security prison, we’ll find out “Snake” Plissken’s real name, and the bad guy will be totally different than the original. Also? It won’t start in New York.

Those are just a few of the details TheWrap can exclusively share about the Twentieth Century Fox reboot of John Carpenter‘s 1981 cult-classic. Neal Cross, creator of the BBC crime series “Luther,” beat out several writers to win the writing job, and delivered a first-draft in late October. “Luther” is known for its grittiness and character work, so writing the remake is  definitely in Cross’ wheelhouse.

Russell returned as Plissken in Carpenter’s 1996 follow-up “Escape From L.A.”

Fox’s Mike Ireland won the bidding for the rights for the new film from Studiocanal. Carpenter, who also directed classics including “Halloween” and “Assault on Precinct 13,” will serve as an executive producer on the remake, with Andrew Rona and Alex Heineman’s The Picture Company also producing.

So what do we know about the remake? Let’s start with these 10 things:

Plissken in the previous two “Escape” films didn’t have a name, but now he does: He’s Colonel Robert “Snake” Plissken.

Instead, he’s the lean, intensely charismatic Thomas Newton, the playboy heir to an agrochemical and biotech corporation. Five years ago, he decided to donate his entire fortune. Sounds like a good guy, right? He’s not.

3. The role originated by Lee Van Cleef will now be played by a woman.

The film will introduce us to CIA Deputy Executive Director Roberta Hauk.

Weird, right? Because New York being a prison was kind of crucial to the whole “escape from New York” concept. In the reboot, New York is breathtakingly lovely. Manhattan is the island we know, but with more towering glass structures and a high, undulating glass wall. The sky is alive with drones as serene as bees, and artificial intelligence controls all in the form of an ethnically ambiguous, cheery young woman called April. A small staff of technicians and researchers known as “Seers” monitor all.

The original “Escape” film deleted the opening scene that showed how Snake Plissken was apprehended. The new version won’t. Its set in another major city, one not in the United States.

6. The film imagines a world in chaos.

Globally, one in every seventy five human begins is now either a refugee, internally displaced, or seeking asylum.

7. A hurricane is coming.

8. April’s security won’t be as good as everyone hoped.

That will make the whole city vulnerable.

9. Snake has only eleven hours to complete his mission.

In the original film, he had 22 hours. Plissken’s mission is to bring in Newton alive.

It’s a mysterious device called Fat Boy — an ominous, dull metal sphere about the size of a car, in a nest of conduits and cabling.