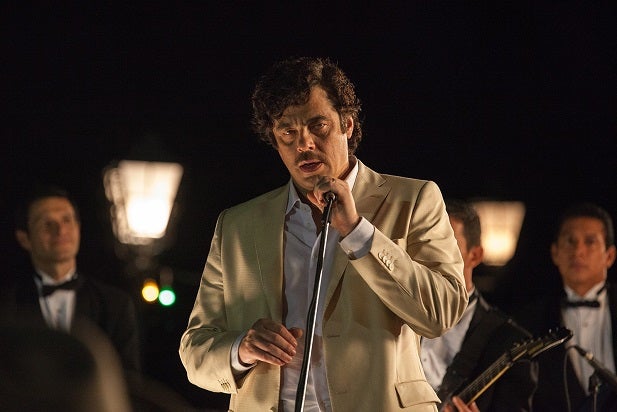 Most drug-war tales play in major keys, the action unfolding between nations and institutions, pitting cartel leadership against police and politicians, lawbreakers against lawmakers. But in “Escobar: Paradise Lost,” director Andrea Di Stefano (making his big-screen directing debut after years of acting in his native Italy and abroad) shuns the approach of films like Steven Soderbergh‘s “Traffic” and books like Don Winslow’s “The Power of the Dog” to tell a story where the drug war isn’t international but interpersonal, where the action plays out across patios and around dinner tables, not over borders or in the corridors of power.

It’s a very different approach, and one aided in no small part by Benicio Del Toro‘s work as Pablo Escobar, the Colombian cocaine kingpin. We first see Escobar calling his mom on a satellite phone so they can pray together the night before he’s slated to hand himself over to authorities. After that moment for God and family, Escobar assembles a group of helpers, including Nick, played by Josh Hutcherson (“The Hunger Games”). Among Escobar’s killers and underlings, Nick stands out like a sore thumb; soon, the film is showing us just how Nick got there and ominously suggesting where he’s going.

Based loosely on reality, “Escobar: Paradise Lost” shows us how Nick first came to Colombia from Canada for the surfing but then stayed after he fell in love with a local woman, Maria (Claudia Traisac); she’s sweet, kind-hearted, beautiful and the niece of Pablo Escobar. When Nick finally meets the philanthropist and civic booster everyone calls “Patron” at a family gathering, he pauses to look around the estate and asks Maria where Pablo made his fortune; her response is matter-of-fact: “Cocaine.”

Director Di Stefano could have let all this turn into a bad joke (and you thought your in-laws were awful), but instead, he and co-screenwriter Francesca Marciano keep things real and right, with Nick gradually drawn into Pablo’s world of money and privilege, thinking his simple love for Maria will keep him safe until the bottom falls out from under him.

Del Toro plays Escobar as a complicated man; he’s a devout drug dealer, a community-minded murderer, and as much as he jokes and laughs with Nick and Maria or plays with his kids in between phone calls demanding death, there’s always the hint of the teeth behind the smile, the possibility of the warm looks turning cold. It’s a part a lesser actor would have chewed on and spat out in a wide-eyed fever of overplaying, but Del Toro’s performance turns an abstract name back into a human being.

The film also trades more in tension and suspense than it does in run-and-gun action; a scene where Nick has to escape an entire town that’s on the lookout for him is slowly modulated and builds from the tense to the excruciating; Hutcherson also gets to display some real talent here, especially as Nick grows more and more frantic and Escobar, more and more desperate. The fact that Hutcherson seems to slink into the background any time he and Del Toro are onscreen together isn’t an accident, nor is it a retreat; it’s a careful and deliberate set of directorial and performance choices that show the uneven power dynamic between the two.

The music and editing also help the film; Max Richter’s compositions play beneath the action with ominous certainty, while editing team David Brenner (“Man of Steel”) and Maryline Monthieux (“Gainsbourg: A Historic Life”) deftly work the film’s cuts and changes of scene whether they’re slowing things down to create a mood or cutting quick to maintain one. What happened to Escobar is a matter of history, but Hutcherson’s Nick has no such certainty on his side, and we want to know what’s going to happen to him next.  “Escobar: Paradise Lost” plays more like Greek tragedy than the kind of drug-war tale we’d get in a broader, bigger film, and that is no small part of the many reasons it works.