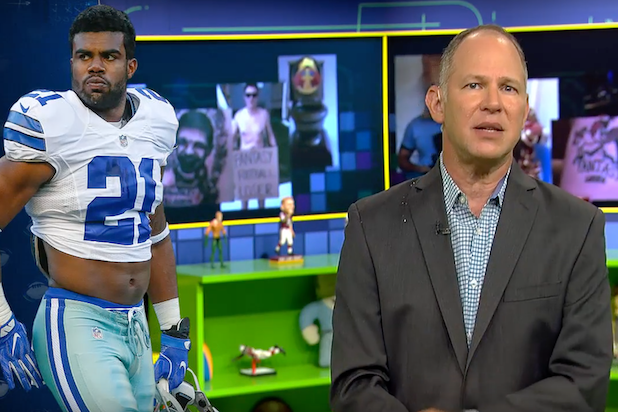 ESPN will kick off a 28-hour Fantasy Football marathon on Monday with senior fantasy sports analyst Matthew Berry reporting the entire time despite his new program debuting on Wednesday.

“Ultimately, Fantasy is fun… What I like to do is try to take statistics and analysis that can sometimes be fairly dry and present them in an entertaining, digestible way,” Berry told TheWrap.

The Marathon will include Fantasy Football specials in primetime, segments on multiple editions of “SportsCenter” and Fantasy Football-themed editions of other programs including, “First Take,” “Jalen & Jacoby,” “Mike & Mike,” “NFL Live,” “Outside the Lines” and “SportsNation,” as well as a special live TV edition of the “ESPN Fantasy Focus Football” podcast.

“The Fantasy Show” will air every weekday on ESPN2 after the inaugural episode launches on ESPN. The show aims to have a blend of fantasy news and analysis with in-you-face graphics that separates it from other programming on the World Wide Leader.

Berry and NFL insider Adam Schefter will appear at least once during every hour of the marathon, which starts on Monday at 7 p.m. ET and concludes Tuesday at 11 p.m. ET. Berry better rest up by Wednesday, when his new show debuts at 5 p.m.

Berry promises any viewer who gives him “30 minutes a day” will become a smarter Fantasy football player… “And a much dumber person,” Berry joked. “It’s Fantasy Football advice built around my personality.”

“Our mandate from [ESPN executive Vice president] Norby Williamson was that the show should not look like anything else on ESPN,” Berry said. “That’s been our marching orders, and that’s what we’re going for.”

Berry described the show as CNBC’s “Mad Money” combined with his childhood passions, which mostly involve sports and comedy.

“There’s a little bit of a ‘Pee-wee’s Playhouse’ feel to it,” he said. “Ultimately, the overarching goal is to make you a smarter, more informed Fantasy player.”

While the show will air on television, they have already started rolling out digital-only teaser clips. Berry said the strategy makes sense because his audience consumes Fantasy content. In fact, he expects a lot of viewers to watch online, as opposed to its initial airing, because it will be available on all of ESPN’s digital platforms.

“We’re excited to be on ESPN2 but the fact of the matter is that Fantasy players are on their phones and computers all day every day. We want to get the content to where they are,” Berry said. “We think the big win for this show is the fact that it is truly a show that was developed for cross-platform.”

Everything from the graphics to the lighting are designed to help digital consumption of the show, something Daniel “Secret Squirrel” Dopp is a big part of. Dopp, a longtime producer of the ESPN “Fantasy Focus Football” podcast, who is making his televising debut, will join Berry. “Secret Squirrel,” who earned the nickname as an intelligence officer in the Air Force, is also a producer on “The Fantasy Show.”

As for Berry’s plans to make it through the marathon and his new show’s debut in the same week, he only has one secret.