Attending the Masters Tournament at Augusta National Golf Club is a bucket list item for all golf fans, including ESPN host Mike Greenberg.

Not only will Greenberg attend the 85-year-old tournament for the first time this year, but he is also part of ESPN’s coverage, which begins Thursday.

“This is something I never imagined I would get the chance to do, I am beyond excited — whatever the next step up is from excited, that’s how I feel,” Greenberg told TheWrap. “I have been privileged during 30 years in the business to cover almost all of the big sports events but this is a bucket list one for me.

“The Masters is my single favorite sporting event of the year. To me, it signifies that spring has arrived and the world just feels like a better and happier place,” he said, plus he also gets to pull out his own clubs for the first time since winter. “For all of those reasons, it is a delightful time.”

The veteran ESPN host had initially inquired to see if he could take New York-based morning show “Get Up!” down to Augusta, Georgia, but then his network bosses asked if he’d like to actually be part of the Masters’ coverage team itself. “I said, ‘Are you kidding?’ And that was pretty much the whole conversation, it took about 30 seconds and it couldn’t have worked out better,” Greenberg said.

Greenberg joins fellow ESPN on-air talent Scott Van Pelt, Curtis Strange, Tom Rinaldi and Sage Steele for four days of coverage at the tournament. Additionally, ESPN will air live play of the first and second rounds of the tournament for the 12th year. 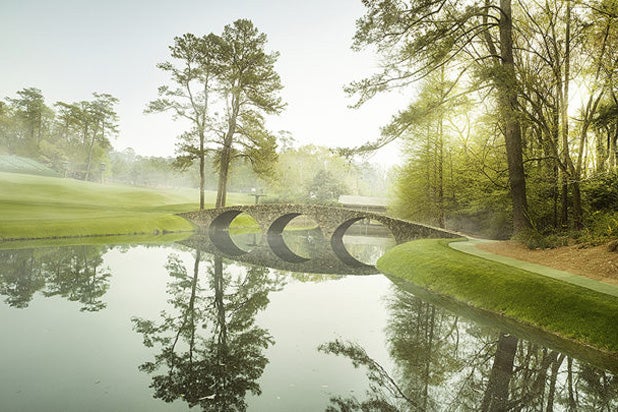 In preparation for his first visit to the elite golf club, Greenberg asked the always well-dressed Van Pelt for tips. “We talked about everything from what shoes to wear to what to expect from the experience as I really want to do well at this,” Greeny said. “If you know SVP, you know he spends a lot of time thinking about his shoes and that was my biggest question as I want to wear suits but at the same time I want to walk the golf course, so we had a lengthy conversation about that!

“After watching every second of the coverage of the Masters each year, I think I have a pretty good idea of what works there, and at the end of the day, we are paid to cover a very prestigious golf championship and that’s what I plan to do,” he said. That’s going to involve not letting his own golf fan explode on live television. “I fully recognize that no one is turning on the TV to see me, my job is to present the Masters from the chair that I get to sit in as thoroughly and professionally as I can,” Greenberg stressed.

Greenberg is far from alone in his admiration for the annual action in Augusta. Last year, ESPN saw a 55% increase in viewership over 2017 for the second round of the Masters, earning the network a 2.9 overnight rating.

“The Masters is the most important golf tournament of the year, it is the most beautiful golf course in the world, and if you asked pro players and gave them the choice of winning any one tournament, this would be the one they’d pick,” Greenberg said. Part of the global appeal is that unlike the U.S. Open and British Open that rotate locations, the Masters has been held in Augusta every year since 1934. “It makes a difference that it is always there.”

Additionally, the course itself is designed to create exciting play. “It is the perfect course for a major championship because of those two par fives on the back nine, anything can happen — if you are within three or four shots of the lead going into the back nine on Sunday, you absolutely have a chance to win.

“There’s almost always the expectation for it to be tight at the end, history dictates that and it would be an upset if it wasn’t,” he added.

So who does have the best chance of winning the legendary green jacket this year?

“It begins with Tiger Woods and the dream scenario from an overall interest standpoint is that he plays well. He doesn’t necessarily have to win the tournament but if he is in contention over the weekend then that takes it to a whole other level,” Greenberg said. “He wouldn’t be my pick to win, but I wouldn’t be floored if he did, which I would have been at this point last year. Rory McIlroy is placing really well but Augusta is all about how well you putt and that’s always the biggest question mark for Rory.”

However, Greenberg is picking Dustin Johnson, “as all other things being equal, I trust him on the greens, he has only won one Major and that doesn’t feel like enough for him,” he predicted.

ESPN and ESPN Deportes will air live action from the first and second rounds on Thursday and Friday from 3-7:30 p.m. ET with an edited encore presentation in prime time each night from 8-11 p.m. on ESPN. CBS then takes over live coverage on Saturday and Sunday.