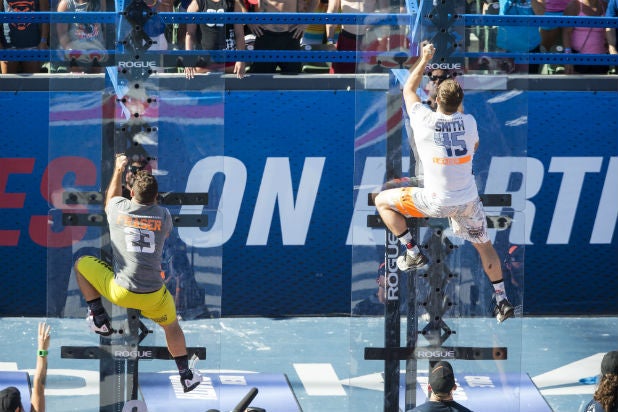 The Fittest Man and Woman on Earth were both crowned at the 2015 Reebok CrossFit Games Sunday, and the next day they dropped by ESPN’s “SportsCenter” to teach some of their gravity-defying strength moves to anchor Stan Verrett.

Ben Smith of the United States and Katrin Tanja Davidsdottir of Iceland were named champions of the four-day global event at the StubHub Center in Carson, California, that featured competitors from over the world and was aired live on ESPN for 50 hours throughout the weekend. They each won $275,000.

With grueling challenges including Midline Madness — alternating sprinting up hundreds of steps with carrying 300 lb weights — or Pedal to the Metal, which included pegboard climbs, rowing, cycling, 400 lb kettlebell squats and handstand push-ups, the athletes from all over the world pushed their strength and endurance to the max.

The following day, Smith and Davidsdottir proved they weren’t too burnt out by the ordeal to visit the “SportsCenter” studio in Los Angeles where the Icelandic female champion performed a flawless handstand push-up for Verrett, after he claimed he said: “I want to do that.”

The challenge ended up being too much for the ESPN host, who later tweeted that he opted for a carne asada burrito from a taco truck downtown over a CrossFit workout.

After that strenuous @CrossFit workout, I feel like I deserve this late night carne asada burrito I'm about to chomp on