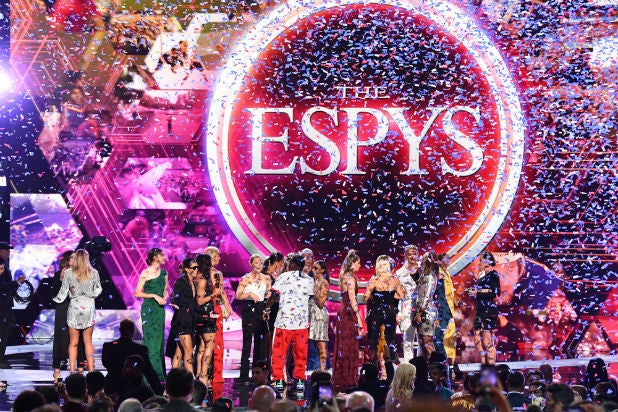 The 2019 ESPY Awards honored not only the best performances but also countless off-the-field achievements in the world of sports over the past year.

While the biggest names in the NFL, NBA and NHL were all in attendance, Wednesday night’s show was truly was a celebration of girl power — with the U.S. Women’s National Soccer Team flying straight from their World Cup victory parade in New York City to Los Angeles to accept the final award of the night.

Over 3.9 million viewers watched Tracy Morgan host the 2019 ESPYS live on ABC, but TheWrap was inside the Microsoft Theater in downtown Los Angeles following the action from behind-the-scenes.

Fatal car crashes aren’t funny
First-time host Tracy Morgan didn’t dodge the risky jokes — starting by saying how much he appreciated being in a room full of rich black people when no one questions where they got their money from. Morgan went on to take a dig at himself about just crashing his brand new Bugatti, followed by a reference to the fatal 2014 crash involving a Walmart truck that fell very flat and cast a silence over the room. He was saved by a Janet Jackson boob/fantasy football joke at least.

Everyone still wants to be Gronk
He may have retired in March, but Rob Gronkowski was still the NFL player who everyone wanted to meet. The former tight end for the New England Patriots hosted the official ESPN pre-ESPYS party on Tuesday night, showing L.A. how you really party like a Gronk Star by including everyone in a dance-off. He even had Super Bowl champions and WWE superstars alike battling to take selfies with him, with Drew Brees and Triple H fighting for camera time. Gronk almost missed the curtain call for the show as he hustled off the red carpet with his girlfriend, Sports Illustrated model Camille Kostek, and, obviously, Hotels.com mascot Captain Obvious.

Lakers 1-Clippers 0
It was a Lakers heavy/Clippers light fan crowd judging by the respective cheers and boos when Morgan mentioned the recent free agency rollercoaster that sent Anthony Davis, Kawhi Leonard and Paul George to the City of Angels.

Also Read: 'ESPYS Red Carpet Show Live' Is Going to Be the 'Most Real Show You Will See on Wednesday'

It really is hot in Cleveland
The most uncomfortable moment of the night came right after Morgan took a jab at Odell Beckham Jr. for having to fake being happy when he was traded from the New York Giants to the Cleveland Browns earlier this year. Before the meaning of the joke even really sunk in, OBJ had to present the first award of the night for Breakthrough Athlete of the Year to former Giants teammate Saquon Barkley. Ouch.

2020 ESPYS host?
The warmup guy during the commercial breaks was even funnier than Morgan most of the time. He kept everyone entertained all night, starting with a seat-hopping  karaoke session with stars in the crowd. Sat in the front row, Dwyane Wade was the first victim. Luckily he knew all the words to the “Fresh Prince of Bel-Air” theme song — and did a pretty sweet Will Smith impersonation.

“Win every day”
A key part of the ESPYS is raising money for the V Foundation for cancer research, something that the audience definitely appreciated when WWE Superstar Roman Reigns, who is a leukemia survivor, introduced legendary UConn coach Jim Calhoun, who was diagnosed with Stage 4 cancer. The recipient of Best Coach award got the entire Microsoft Theater on their feet and many in tears during his acceptance speech. “Try to win every day,” is the advice he gives to all of his players, Calhoun told TheWrap on the red carpet.

Athletes really do drink
Forget the after parties, the bar area of the Microsoft Theater was the best place for schmoozing and networking due to the “no drinks in the auditorium” rule.  There’s nothing like meeting your sports idol over a baked pretzel and a cocktail in a plastic glass. It looked like rush hour on the 405 freeway during the commercial breaks as crowds traipsed back and forth to their seats.

Sports legend trifecta
What do Rob Gronkowski, Lindsey Vonn and Dwyane Wade have in common? They can keep an audience standing on their feet for over four minutes and three speeches as the recently-retired stars shared the stage to celebrate their career achievements as part of a Best Moment segment. Blame Drew Brees for Wade having to change his script to give a special shoutout to wife, Gabrielle Union.

Alex Morgan unfiltered
World Cup champion Alex Morgan epitomized flawless glamour when she accepted the award for Best Female Athlete despite a mad dash from the victory parade in NYC earlier that morning meaning the the World Cup champs had to do their makeup in the limo. Guests inside the theater got to see clips of Morgan unfiltered and often sleep-deprived in previews from ESPN+ documentary “The Equalizer.”

Stuart Scott’s legacy
Stuart Scott is never far from people’s minds at the ESPYS, especially during the presentation of the Jimmy V Award for Perseverance. This year’s recipient was football coach Rob Mendez, who was born without any arms and legs. Mendez mentioned those honorees who came before him including Jimmy V himself, Craig Sager and Scott. The late “SportsCenter” anchor, who died in 2016, also got a special tribute during the commercial break when the cameras stopped rolling.

Bleep
Was Kobe Bryant’s segment presenting the Arthur Ashe Courage Award heavily bleeped on TV? Audience members were warned of bad language and expletives, telling parents to cover their kids’ ears before Bryant recognized the legacy of Bill Russell. However, some of those words sounded more sophisticated when read out by Samuel L. Jackson and Barack Obama from Russell’s memoir, which detailed the Boston Celtics icon’s stand against racism. Russell, 85, himself didn’t come on to the stage, but instead accepted his standing ovation from a balcony high above this reporter’s head.

Winners of the best partiers award
Sandra Bullock got a group “yes” when she said “for those who are in favor of equal pay” to announce who won the Best Team award — how could it be anyone other than U.S. women’s soccer?!? The entire team kept the celebration going at the ESPN post-party, taking over a section of the VIP area and getting a special mention from headliner, 2 Chainz.

Remember to tip your bartenders
If this whole football thing doesn’t work out for Patrick Mahomes, he has a future in bartending. The Kansas City Chiefs quarterback was spotted literally behind the bar at the ESPN post-party, with a few inebriated guests trying to order drinks from him after he quickly dashed behind the bar. Though he could’ve just been looking for a shortcut to the other side of the venue, he lingered long enough for people to start asking him for service. Sadly, they were disappointed when he took off without pouring any drinks.