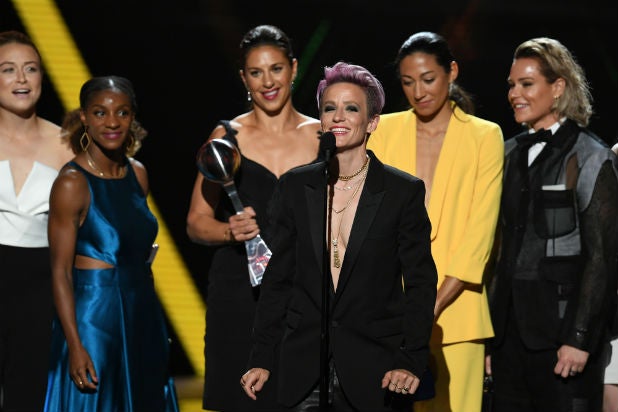 Though the night’s nominees included luminaries like Serena Williams (who won for Best Female Tennis Player) and Kevin Durant, the biggest stars of the show were members of the women’s national soccer team, who arrived in L.A. from their World Cup Finals victory parade in New York City earlier Wednesday.

Among other highlights, the St. Louis Blues’ Stanley Cup victory nabbed the team Best Comeback. And for the first time ever, all the nominees for Best Male Athlete — Patrick Mahomes, Mookie Betts, Antetokounmpo and Brooks Koepka — were rookies to the category.

Also Read: 'ESPYS Red Carpet Show Live' Is Going to Be the 'Most Real Show You Will See on Wednesday'

The 2019 ESPYS Awards aired live on ABC at 8:00 p.m. EDT, from the Microsoft Theater in Los Angeles.