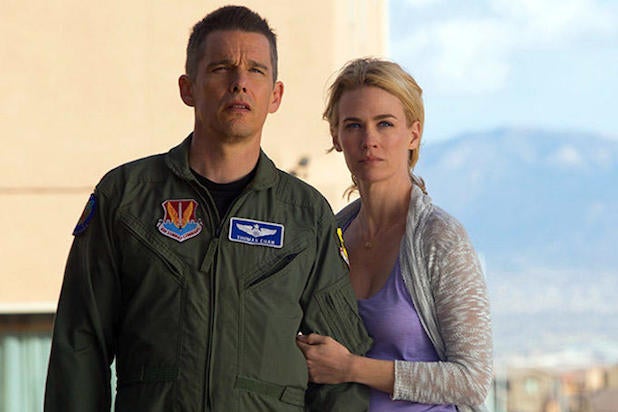 “Good Kill” is a chilling inside look at drone warfare and its collateral damage — not just abroad, but on the home front, where soldiers succumb to PTSD without even setting foot on a battlefield.

Egan (Hawke) used to live to fly. Now, he spends eight hours each day fighting the War on Terror by remote control and the remaining time at his suburban home, where he feuds with his wife (Jones), and numbs his boredom, rage, and guilt with alcohol. When Egan and his crew are told to start taking orders directly from the CIA — which selects its targets based not on personal profiles but patterns of activity — the notion of a “good” kill becomes even more maddeningly abstract, and Egan’s ability to comply with his superiors’ directives reaches its breaking point.

“We are extremely pleased to be working with Ethan once again as he reteams with the remarkably talented Andrew Niccol,” said Jonathan Sehring, president of Sundance Selects/IFC Films.

The deal was negotiated by Arianna Bocco, senior VP of acquisitions from Sundance Selects/IFC Films with CAA on behalf of the filmmakers.