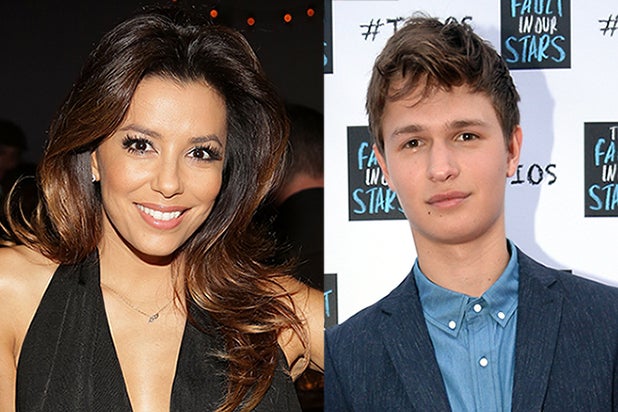 The “Desperate Housewives” actress and “The Fault in Our Stars” actor will take the stage together Wednesday, Dec. 10 at the Pacific Design Center in West Hollywood, the program’s executive producer Kathy Connell announced on Monday.

The unveiling of the SAG Award nominees will be simulcast on TNT and TBS at 9 a.m. ET and webcast live on sagawards.tntdrama.com and tbs.com.

Longoria is best known for her turn on ABC’s long-running drama “Desperate Housewives” and has more recently guest starred on Fox’s “Brooklyn Nine Nine,” but she also has a prolific career behind the camera, having executive produced the documentaries including “Harvest” and “Food Chains,” and Lifetime’s drama “Devious Maids.”

In addition, she is the founder of “The Eva Longoria Foundation,” which is dedicated to helping Latinas build better futures for themselves through education and entrepreneurship.

Elgort starred opposite Shailene Woodley’s Hazel in “The Fault in Our Stars” this summer, based on John Green‘s best-selling novel. He also appeared alongside Woodley as Caleb Prior in “Divergent,” and is set to reprise his role in the YA adaptation’s second installment, “Insurgent,” due out in 2015. The up-and-comer began his film career co-starring in the 2013 remake of “Carrie”.