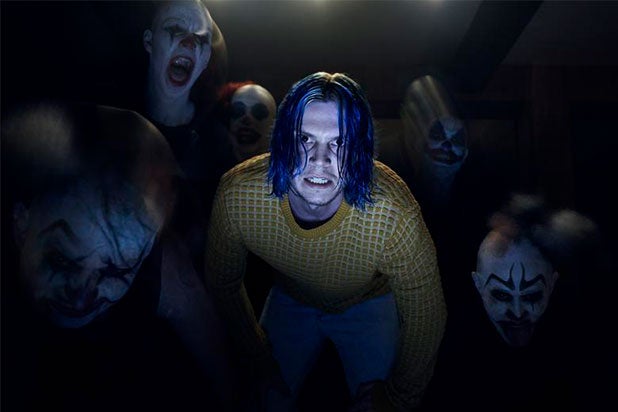 The Wrap has partnered with Canvs, the emotion analytics company, for a weekly look at some of the characters and personalities that have TV viewers the most worked up on social media. The data below covers Aug. 30 through Sept. 5 and is drawn from the most emotionally reacted-to television programs, including broadcast, cable, streaming and PPV.

Despite the return of college football (always known for prompting huge discussion in social media), it was the premiere of “American Horror Story: Cult” on FX that garnered the most Emotional Reactions (ERs) — 71,299 — in the last week. Topping the list of people discussed was Evan Peters, who’s been one of the main cast members since the show began in 2011. Comments ranged from simple proclamations of love to commentary about his role in the premiere, where he appeared with blue hair and, at one point, put Cheetos in a blender.

I'm so in love with Evan peters.

DID HE BLEND CHEETOS AND PUT IT ON HIS FACE?! Eww!#AHSCult

Evan pouring cheetos into a blender is me ???? #AHSCult

Of course, football is never too far from the top of the ER list, and this time around it was the Texas A&M vs. UCLA game on Fox that had people worked up the most, to the tune of 60,278 ERs. UCLA quarterback Josh Rosen was the talk of social media given his role in helping the team come back from a 34-point deficit to triumph over Texas. While many people were applauding his prowess, there were (of course) some haters in the crowd.

OMG JOSH ROSEN IS A GOD

Josh Rosen has the dumbest face.

Another quarterback sparked massive conversation this week — Deondre Francois of the Florida State Seminoles, who was injured during their game against Alabama, which was broadcast on ABC and racked up 40,912 ERs. For most of the game the conversation around Francois was typical — lots of cheering and positive talk, but it turned more serious in the fourth quarter when he was sacked by Ronnie Harrison and went down clutching his knee. Fans were quick to offer prayers and hopes that he’d be ok. (Francois had a successful surgery a few days later, but it’s a season-ending injury.)