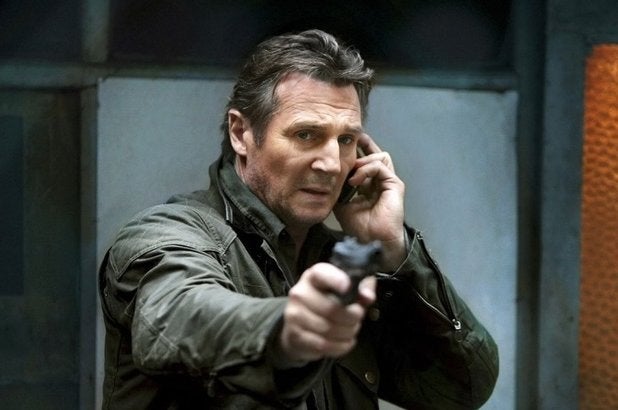 Probably not, but that didn’t stop people on the internet from making the same reference to a classic “Simpsons” episode, where Homer Simpson becomes Springfield’s favorite snow plow driver.

In the fourth season episode of “The Simpsons” titled “Mr. Plow,” Homer purchases a snow plow, and even turns it into a successful business (with a catchy theme song to boot). That is, until his friend Barney Gumble starts a rival business and quickly puts Homer out of work.

Most of the jokes about “Hard Powder” referenced Liam Neeson’s past role in the “Taken” trilogy as a Brian Mills, a man with “a particular set of skills.” Maybe they involved snow plowing?

“Hard Powder,” which will hit theaters next February, is a remake of the 2014 Norwegian film “In Order of Disappearance.” Directed by Hans Petter Moland, it also stars Laura Dern and Emmy Rossum.

Per Studiocanal, here’s the official synopsis of the film:

Quiet family man and hard-working snowplow driver Nels is the lifeblood of a glitzy resort town in the Rocky Mountains because he is the one who keeps the winter roads clear. He and his wife live in a comfortable cabin away from the tourists. The town has just awarded him “Citizen of the Year.” But Nels has to leave his quiet mountain life when his son is murdered by a powerful drug lord. As a man who has nothing to lose he is stoked by a drive for vengeance. This unlikely hero uses his hunting skills and transforms from an ordinary man into a skilled killer as he sets out to dismantle the cartel. Nels’ actions ignite a turf war between a manically unpredictable gangster known as Viking and a Native American gang boss. Justice is served in one final spectacular confrontation that will leave (almost) no one unscathed.

Read more of the tweets below:

The gritty reboot of the Mr Plow episode of The Simpson’s we deserve. https://t.co/SQpFWg1tmg