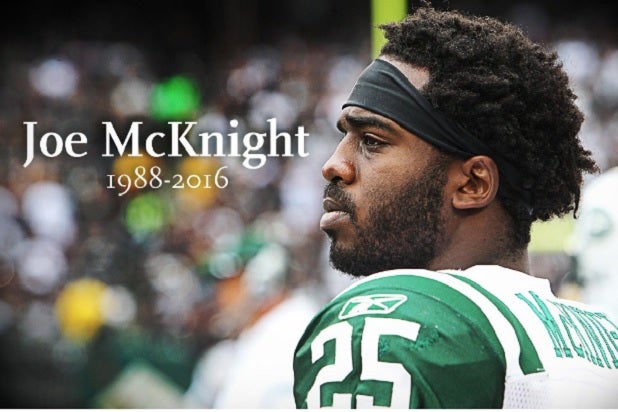 Joe McKnight, who played for both the New York Jets and Kansas City Chiefs, was killed Thursday in Terrytown, Louisiana, in an apparent road rage incident. He was 28.

The Jets confirmed the news, writing on their official Twitter account, “Rest in peace, Joe McKnight. Our thoughts and condolences are with his loved ones.”

According to the New Orleans Time-Picayune, a witness observed McKnight arguing with another man at the intersection of Behrman Highway and Holmes Boulevard in Terrytown. She said McKnight was trying to apologize to the man when the man drew a gun and shot McKnight multiple times.

The shooter then allegedly stood over McKnight and said, “I told you, don’t you f— with me” before firing again.

The shooter is currently in custody and is being questioned by New Orleans authorities.

A New Orleans native, McKnight was a high school football standout who was recruited to play running back for the University of Southern California beginning in 2007. He entered the NFL Draft in 2010, being selected in the fourth round by the Jets.

McKnight’s pro career proved to be less illustrious. He failed the Jets’ conditioning test in 2013 during training camp, per ESPN, which he blamed on dehydration. He was then arrested for outstanding traffic violations and missed practices due to what he later called a concussion. He also got into a Twitter battle with a fan in which he challenged the fan to a fight.

Also Read: NFL Denies 'TNF' Is Getting Sacked: 'Someone Is Working Overtime at the Rumor Mill'

McKnight was released by the Jets in 2013, signing with the Kansas City Chiefs in 2014. He played two games for the team and scored two touchdowns before tearing his Achilles tendon. He went on to play for the Canadian Football League and is still listed as an active player on the roster of the Saskatchewan Roughriders.