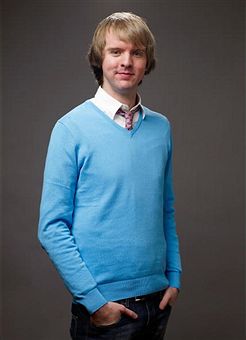 Co-written by Gyllenhaal and Justin Rhodes, the film is based on Phil Campbell's book "Zioncheck for President," a memoir of the 2001 Seattle City Council election.

Biggs will play Campbell, a recently fired reporter who reluctantly signs on to run the campaign of his eccentric friend, former pedicab driver and fervent Monorail believer Grant Cogswell (Moore).

Ambrose will play Emily, Phil's girlfriend who is a fellow journalist and Cogswell supporter.

Smulders will play Clair, a Monorail supporter skeptical of the blundering Cogswell campaign.

Gyllenhaal has been working primarily in TV for the past decade but his previous big-screen efforts include "Losing Isaiah" and "Homegrown."

Earlier this year, Pierson released his first novel, "The Boy Who Couldn't Sleep And Never Had To." He recently appeared on NBC's "Community," which stars fellow Derrick Comedy member Donald Glover.

"Grassroots" is currently in production in Seattle.