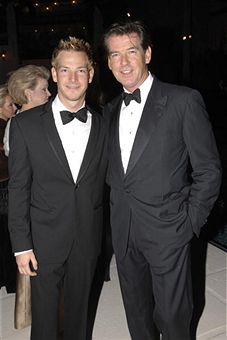 Former James Bond franchise star Pierce Brosnan is set to co-star in the thriller "Bonded" with his son, Sean Brosnan, who will also produce.

Mo Ramchandani ("Devil's Creek") will direct from his own screenplay, which is based on true events that took place in El Monte, Calif. in the early '90s.

The "Oliver Twist"-esque story follows a Mexican teenager named Jesus who, after the death of his mother, is sold by his father and smuggled into America, where he's forced to work as a bonded slave laborer in a Los Angeles sweatshop.

While imprisoned there, he befriends a young woman named Elena. But when she is claimed by a sex trafficker, Jesus must make a daring escape in order to rescue her.

Ramchandani tells TheWrap that both Brosnans will be playing cops in the movie.

The filmmaker, who grew up in London with Sean Brosnan, is in the process of casting the male lead.

"I want to make movies that not only entertain people, but also empower, educate and inspire them," said Ramchandani, a principal of Avatar Entertainment Group.

Joe Dain ("Gardens of the Night") will also produce the project, while Pierce Brosnan and Beau St. Clair of Irish DreamTime are expected to serve as executive producers. Production is scheduled to begin in September.