Now we know who Andrew Garfield had to beat out to play Peter Parker in Sony's "Spider-Man" reboot.

An individual with direct knowl 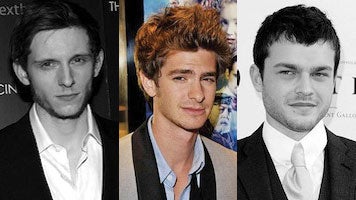 edge of the casting process tells Deal Central that contrary to published reports, Sony only reviewed the three strongest test tapes and that the other two finalists were Jamie Bell and Alden Ehrenreich.

The studio considered hundreds of actors and the list was narrowed after each stage in the process.

When execs saw Garfield's tape, they were "blown away."

Of all the rumored candidates, Bell (right) was the actor with the most tentpole experience, having

previously starred in Peter Jackson's "King Kong" and recently wrapped Steven Spielberg's upcoming "The Adventures of Tintin: The Secret of the Unicorn."

In contrast, Ehrenreich (left) probably had the least acting experience besides Frank Dillane, who at least played Tom Riddle in "Harry Potter and the Half-Blood Prince."

Ehrenreich's biggest credit to date has been Francis Ford Coppola's little-seen gem "Tetro." Though Ehrenreich didn't win the "Spider-Man" role, he's certainly come a long way from the bat mitzvah video he appeared in that caught the eye of Spielberg, according to Hollywood lore.

I'm sure both actors will go on to big things, but Garfield is Hollywood's man of the hour, and I'd say Sony made the right decision regarding the three finalists.