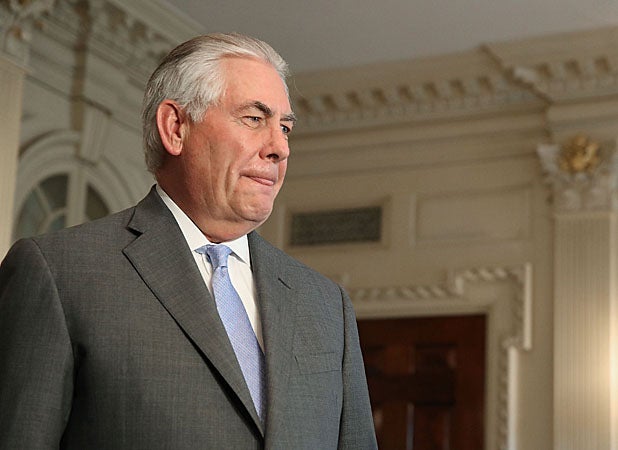 A year’s worth of email belonging to ExxonMobil’s former CEO Rex Tillerson, now the Secretary of State, cannot be found, the company said in court on Wednesday.

The correspondence was sent between 2008 and 2015 under the name “Wayne Tracker,” according to the McClatchy news service.

Tillerson, whose middle name is Wayne, apparently used the account to communicate more easily with others in the company about “a broad range of business-related topics,” the company said. But the existence of the account was not previously disclosed in an investigation into whether ExxonMobil purposefully misled the public and investors about the impact of climate change. And now, in addition, the emails have disappeared.

A Manhattan Supreme Court judge has ordered ExxonMobil to work with New York Attorney General Eric Schneiderman to locate the emails, which were subpoenaed as part of the investigation.

The investigation has been going on since November 2015 and stems from an order by the court demanding that ExxonMobil produce documents related to its knowledge on climate change — some of which go back as far as 40 years.

The alias account was uncovered by Schneiderman’s investigative team earlier this month, and had not been previously disclosed by the company.

Judge Barry Ostrager has now demanded Exxon deliver sworn statements from staff associated with the Wayne Tracker account by March 31, adding to the current 416,000 documents already produced by Exxon for the court.

On Wednesday, senior enforcement lawyer for New York John Oleske described the missing emails as a “bombshell,” according to Gizmodo.com.

“Exxon concedes that it failed to preserve all documents from an alias email account used by Rex Tillerson,” he said in a court filing before the hearing. “Exxon’s conduct outside this court reflects a pattern of stonewalling and disingenuousness.”

Even POTUS must admit: These covers are creative

New York Daily News continues to parody Donald Trump with a new cover depicting the president as Austin Powers' nemesis, which hits newsstands Thursday. Here are more examples of cover art that has taken shots at Trump in creative ways.