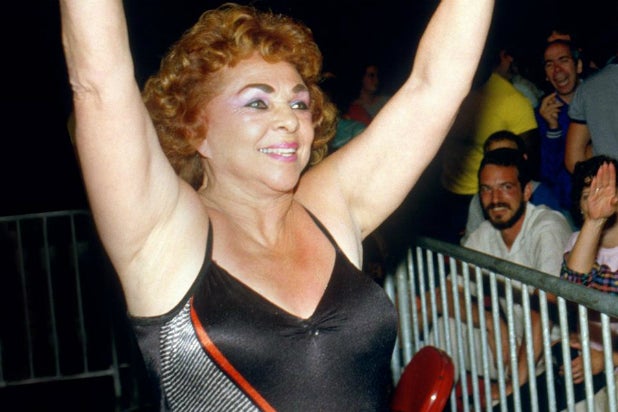 The event is set for next month’s WrestleMania 34, which is the latest installment in the annual Super Bowl of sports entertainment. Here’s the problem: While Moolah is a huge name in the history of women’s professional wrestling, her reputation as a booker, trainer and mentor to other women is about as bad as it gets, and many wrestling fans think she is undeserving of such an honor.

Moolah’s backstage legacy is anything by “fabulous”: She has been accused by women who wrestled for her of pimping them out to men in the business, as well as skimming large chunks of their pay. Moolah, whose real name was Mary Lillian Ellisor, died in 2007 at age 84.

WWE, which named a 2017 all-female wrestling tournament after fellow in-ring legend Mae Young, did not immediately respond to TheWrap‘s request for comment on the public calls to change the new match’s name.

The legacy of The #FabulousMoolah will be honored in the first-ever Fabulous Moolah Memorial Battle Royal at #WrestleMania 34! pic.twitter.com/tSXl2VoimY

The backlash isn’t limited to one petition — see some more of the outcry here:

The "Fabulous" Moolah was a serial abuser of women in every way possible. She made her career off of the suffering and exploitation of young women who trusted her with their lives & safety. She shouldn't be honored by WWE — they should be ashamed that they enabled her. #RAW

Just did a bunch of research on Fabulous Moolah. pic.twitter.com/Lz3V1nZS7U

Did you know? The Fabulous Moolah was a human trafficker for female wrestlers. She pimped semi-trained women to promoters and their wrestlers, those who didn't comply were raped. @WWE, remove her name from the WrestleMania Womens Battle Royal asap. pic.twitter.com/cHff614MKs

The Fabulous Moolah was a serial abuser. She made a career off the suffering and exploitation of women who trusted her with their lives & safety. She drugged women to keep them controlled. Sickening. https://t.co/ICl65ah1eO

I am all for the Women having a Battle Royale at #Wrestlemania. Love it!

But if you’re going to name it after The Fabulous Moolah, just bring Hogan back already.

Just a warning,
All competitors in the #FabulousMoolah battle royale who don't win will be required to have sex with a promoter, in honour of Moolah's legacy.#Wrestlemania

The WWE women logging into their accounts to type mandatory inspirational tweets about The Fabulous Moolah because of the company email they received from Vince pic.twitter.com/tVVs1nZ2Tl

WrestleMania 34 will take place April 8 from the Mercedes-Benz Superdome in New Orleans. It will air on pay-per-view and WWE Network.