Despite the odds against rental chains, Family Video is shunning the newfangled kiosks and video on demand businesses in favor of the traditional store model. And it’s working.

The privately held video game and movie rental chain is quietly taking advantage of its big name competitors’ woes to expand its reach. Over the last year, the Glenview, Ill.-based company has opened 45 new locations in places such as Kentucky, Minnesota, Oklahoma, and Tennessee. It plans to open roughly the same number in the coming fiscal year.

"We’re a mom-and-pop store on steroids, but we still have a mom and pop soul, " said Tim Reynolds, a spokesperson for Family Video. 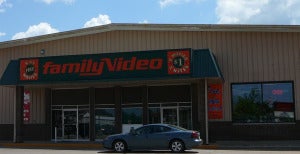 Family’s expansion play comes as chains like Blockbuster and Hollywood Video are moving aggressively to close hundreds of stores. Though the company will not release its earnings, it says it remains profitable.

"They seem to be doing quite well, and like Blockbuster they have traditionally been involved with in-store rentals," said Michael Arrington, an analyst with Adams Media Research. "But they’ve been careful. When things were going well, large chains overexpanded, rushed out to build new stores, and got on the hook with franchisees. (Family) is deliberate about where they put stores. They make sure they’re the right size for a place and expand slowly."

"The perception has been that the market is dying," Reynolds said. "Well, the market is not going away that dramatically. Blu-ray is going to help keep it going steady. We’re going to take advantage of our competitors’ poor strategic decisions, but we’re not going to close stores."

Like the name suggests, the video chain remains a family affair. The company traces its origins back to an appliance business started in 1946 by a midwestern entrepreneur named Clarence Hoogland. In the 1970s, the appliance company found itself with a large quantity of videos, and made the decision to open a few rental outfits.  In 1978, this offshoot, christened Family Video, was founded. It’s grown to employ over 5,000 people in 19 states, and is run by Clarence Hoogland’s grandsons Keith and Eric, who serve president and vice president, respectively.

Family believes that it can continue to build on its success by catering to a portion of the population that is slow to move to video-on-demand and subscription and by offering competitive pricing and promotions — and it’s not trying to move online. The company also credits its continued profitability to a decision to give each one of its locations its own unique feel and to eschew a corporate aesthetic.

"People are always amazed to find out we’re a chain," said Reynolds. "We pride ourselves in doing everything on our own. We make our own racks and counters, and manufacture everything in store. It’s something we take pride in."