Tens of thousands of protesters have flooded the streets of central London in response to President Donald Trump’s first visit to Britain as U.S. president.

Organizers of the march estimated that they had been told by police that more than 100,000 protesters had joined the march in Trafalgar Square by mid-afternoon. Among them have been celebrities from both sides of the pond, including Chris O’Dowd, Aubrey Plaza, and Stormy Daniels’ lawyer Michael Avenatti.

Trump arrived in London on Thursday at the invitation of Prime Minister Theresa May and has been met with protesters since his arrival. The protests on Friday featured the release of a highly anticipated balloon known as the “Trump Baby,” which depicts the president as a pouting baby in a diaper and holding a smartphone. Trump is meeting with May, miles from the location of the main protests, and will meet with Queen Elizabeth II later today.

Several famous names, including actors and media fixtures, took to Twitter to share their own pictures from the ground, while others offered solidarity from afar.

O’Dowd, who was nominated for a Tony in 2014 for his role in “Of Mice and Men,” retweeted a picture of him giving the middle finger to the camera, writing, “hit him where it hurts.” He also shared a picture of a sign that read, “Not usually a signmaker, but crikey.”

Aubrey Plaza, known for her roles on “Parks and Recreation” and FX’s “Legion,” shared a picture of herself giving a thumbs up as she stood amidst a sea of protesters. 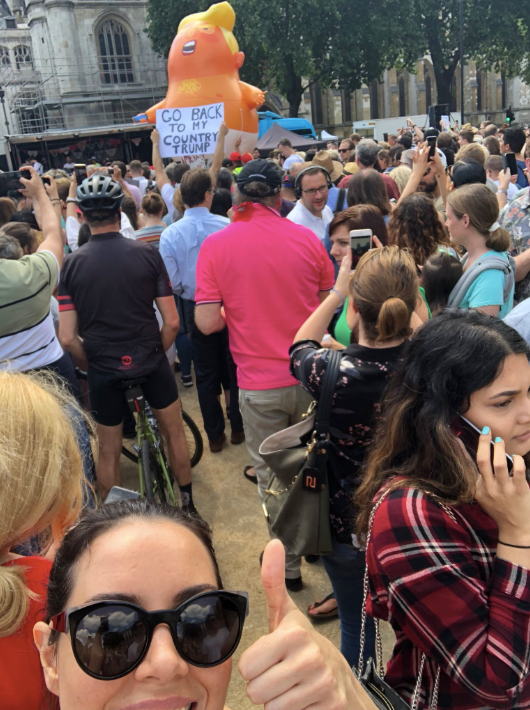 Michael Avenatti, known for representing Stormy Daniels in her lawsuit against Trump, wrote that he was “honored to be marching with my brothers and sisters from across the pond,” and later shared a video of the blimp of Trump as a giant baby in a subsequent tweet, alongside a caption that read, “Yep, lots of respect for Mr. Trump here in London today. BIGLY respect.”

Following the #TrumpProtests hashtag reveals some posters, placards and slogans that approach poetry. Won’t change the brutal mind of a mobster like him of course, but sometimes it’s enough just to join together to get things off your chest. Makes you proud to be British.

Chrissy Teigen also lent her support in the form of a retweet, which highlighted a protester who used one of her anti-Trump tweets as inspiration for her sign.

This is so beautiful. I love London. https://t.co/RLGeFFy7yj