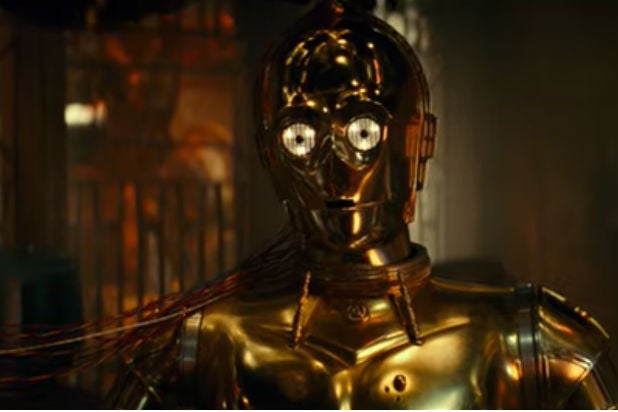 While the latest (and last) trailer for “Star Wars: The Rise of Skywalker” was short on any real plot specifics, it was heavy on somber emotional beats. And fans were hit especially hard after the video arrived Monday night by a scene that appears to suggest C-3PO may not be long for this galaxy far, far away.

The scene happens midway through the trailer, when we see what looks like a tiny little welding droid doing… something to the back of Threepio’s head. “What, uh, what are you doing there, Threepio?” asks a worried Poe Dameron (Oscar Isaac).

At that, R2D2 does a sad whine, Threepio appears to comfort him, and then Chewbacca does a sad growl. We’re not crying, you’re crying. Shut up! And, uh, watch the trailer here to see for yourself.

We have no idea what the exchange means — we don’t even know what the movie is even about yet — but it sure looks to us like the movie is outright telling us that Goldenrod is going to die, possibly by sacrificing himself to save his friends. And on social media, fans agreed.

“C3PO better not die I swear” said one.

“If C3PO dies (shuts down for good) I will hate Disney Star Wars for good no doubts and I thought it couldn’t get worse than Luke dying,” said another.

Han Solo died in “The Force Awakens.” Luke died in “The Last Jedi.” And since “The Rise of Skywalker” is supposed to be the definitive end to the Skywalker saga that began in “A New Hope,” we’re not exactly surprised by the idea that some major characters who haven’t yet died will say a final farewell. But man, poor Threepio has spent his entire life worried about literally everything, so we hope this is a fakeout and he gets something resembling a happy ending.

If C3PO dies I will immediately call the god damned police.

I am a 44-year-old man who is by no means emotionally prepared for the death of C-3PO. https://t.co/VaJLNx0uDu

Did not expect C3PO to have the line in the trailer that got me all emotional… pic.twitter.com/iz9x4IbNYR

if C-3PO dies then good lord please take me with him https://t.co/PThLK8fV5D

Directed by JJ Abrams, “Star Wars: The Rise of Skywalker” hits theaters near, near close on Dec. 20.