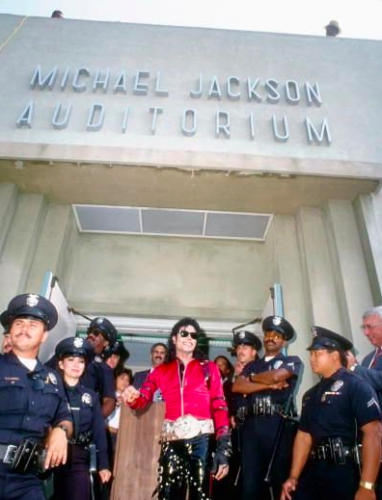 A Facebook and Twitter campaign to force school officials to restore Jackson’s name to the auditorium of the Gardner Street Elementary School has picked up force, attracting over 2,100 supporters.

The page’s administrators are encouraging admirers of the Gloved One to pepper the elementary school’s principal Kenneth Urbina and school superintendent Ramon C. Cortines with letters calling for its reinstatement.

Jackson attended sixth grade at Gardner after moving with his family to Los Angeles. His name was originally installed above the Hollywood school’s auditorium in 1989.

Jackson attended a dedication ceremony and donated money to the school’s music program, but following his 2003 arrest on child molestation charges, school officials, acting on requests from parents, covered up his name.

School officials did not immediately return requests for comment, but the campaign’s organizers hope the outpouring of support will force administrators to uncover Jackson’s name.

"It’s a disgrace," Sahar Jannati, one of the campaign’s organizers and a Gardner alum. "Fandom aside, he did a lot of humanitarian work and has a musical legacy. He was found innocent of those charges and he doesn’t deserve to have his name covered with plywood."

Jannati, who started the campaign in February after school officials failed to follow up on her calls and a letter petitioning them to reconsider their decision regarding the auditorium, estimates that the school district has been bombarded with over 2,000 letters and emails.

So far, they have not heard if the district is considering their protests. While they are sticking to letter writing for the foreseeable future, Jannati has not ruled out a public protest should the school fail to act.

"All of the Hollywood schools honor their alums who become celebs, and when you have a celeb of [Jackson’s] stature and caliber, you shouldn’t be ashamed," Jannati said.