I think that Wes Anderson, and in particular Wes Anderson movies, are a love-it-or-hate-it kind of thing.

Either you find his point of view unique and charming or irritatingly precious. There’s really no in-between.

While I’m firmly on Team Anderson (the shirts are artistically rendered and the cheers are quite literate), I can see the other point of view.

"Bottle Rocket," his first movie, stands alone in look but has the same tone and topics as his other movies. "Rushmore" was the opening act, a taste of things to come.

"The Royal Tenenbaums" is probably the best known, and its themes of estranged (and strange) families and sensitive and misunderstood sons, along with a perfectly edited soundtrack of 1960s and 1970s music (not Foreigner) and almost obsessively curated looks are echoed, revived and revisited in "The Life Aquatic" and "Darjeeling Limited." 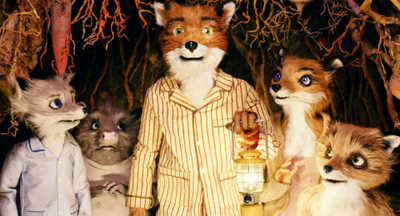 In some ways, even though each movie is almost studiously different, they’re also very much cut from the same light brown corduroy cloth.

What makes "The Fantastic Mr. Fox" such a standout is that it’s not just a better Wes Anderson movie, it’s a great movie.

Based on a children’s book by Roald Dahl and, at least in theory, a movie made for children (“What the cuss?” is the expletive of choice), "Mr. Fox’s" premise is deceptively simple: A fox, voiced spectacularly by George Clooney, is bored as a newspaper columnist (just go with it) and plans one last chicken heist, in theory an animal version of "Ocean’s Eleven." In typical Wes Anderson style, we get a disaffected son and his competition, the charmingly odd companion, the goofy friends – all typical Andersonian themes.

Not satisfied with filling the existing world with his versions of humans, Anderson here creates an entire world, quite literally.

Every animal, every shirt, every Post-It note hanging on an office wall – each part of Mr. Fox’s universe was created and manipulated by hand. Instead of taking us back to the world of old-school clay-animation or highlighting the divide with Pixar perfection, the choice makes the movie more human, more alive, more real than any movie Anderson has made before.

It makes sense that a writer-director so enamored with beings of his own creation would be best served by actually being able to create that world.

The fact that the characters are, in theory, animals makes no difference because he doesn’t treat them as animals. Their problems – family issues, money, fighting against their natures – are human problems. And the meticulousness of their expressions, coupled with the authenticity of the actors’ voiceovers, feels very honest and true.

All this high-handed talk takes away from some simple facts. "Mr. Fox" is a very funny movie. It’s smart without being snooty, something that Anderson hasn’t always managed to do in the past. It’s charming without using that charm as a crutch. And it’s one of the most intensely creative movies I’ve seen in a long time.

Before seeing "Mr. Fox," I would have been happy to visit Anderson-land. After seeing it, I would be happy to live there.