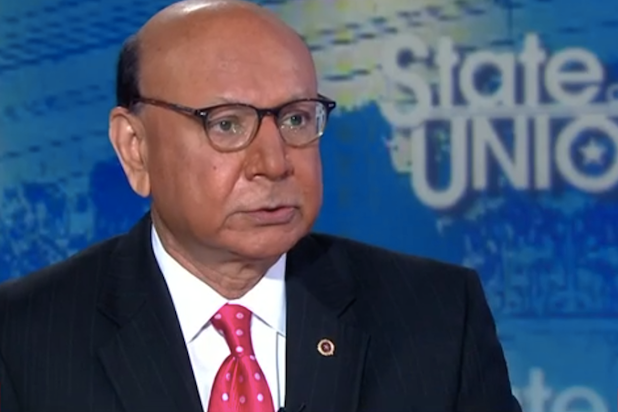 The Virginia father of U.S. Army Captain Humayun Khan, who was killed in Iraq in 2004, had more to say on Sunday about Republican presidential candidate Donald Trump.

“He is a black soul,” Khizr Khan told CNN.

Khan addressed the Democratic National Convention last week as his wife stood next to him. The couple later drew fire from Trump, who suggested grieving mother Ghazala Khan was forbidden to speak at the convention.

“[He] is totally unfit for the leadership of this country,” Khan went on to say about Trump. “The love and affection that we have received affirms that our grief — that our experience in this country has been correct and positive. The world is receiving us like we have never seen. They have seen the blackness of his character, of his soul.”

During an appearance on ABC’s “This Week,” Trump questioned whether the Clinton camp had written the speech for the Khans. “Did Hillary’s script writer write it?” he asked.

Later during the taped show, which aired on Sunday, Ghazala Khan expressed her disgust with the Republican nominee and said of her husband’s speech, “When I was standing there, all America felt my pain.”

Khizr Khan chimed in on the ABC show, calling Trump’s accusations “disrespectful” for “not realizing her pain.” He added: “Shame on him!”

Ghazala Khan also wrote an opinion piece in the Washington Post, explaining that she chose of her own volition not to speak at the DNC because she “could not.”

“When Donald Trump is talking about Islam, he is ignorant,” she went on to write. “If he studied the real Islam and Koran, all the ideas he gets from terrorists would change, because terrorism is a different religion.”

Also Read: How Hillary Clinton Disappeared Into Her Own Speech (Commentary)

She went on to address Trump’s claim that he, like the Khans, has made sacrifices: “He doesn’t know what the word sacrifice means.”

Trump took to Twitter on Sunday, in an apparent attempt to clarify his position on the matter which has been receiving a lot of press:

Captain Khan, killed 12 years ago, was a hero, but this is about RADICAL ISLAMIC TERROR and the weakness of our "leaders" to eradicate it!

I was viciously attacked by Mr. Khan at the Democratic Convention. Am I not allowed to respond? Hillary voted for the Iraq war, not me!