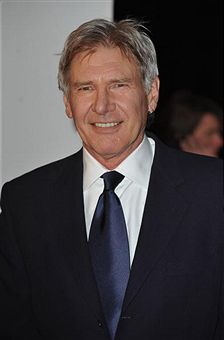 On his verified account, Favreau wrote "Please stop asking if Harrison Ford is in Cowboys & Aliens. Okay? He is. Please don’t tell anybody."

It’s unclear what role Ford will play, but don’t be surprised to see him fending off aliens (again) as a crotchety old cowboy who’s just itching to growl "Get off my horse!"

Daniel Craig and Olivia Wilde are currently attached to star in the big-screen adaptation of Fred Van Lente and Andrew Foley’s graphic novel (which you can read online for free at Drunk Duck). It concerns warring groups of cowboys and Native Americans who must put their differences aside and join forces in order to battle alien invaders.

It’s certainly a fun concept but I reserve the right to save my pre-judgment until after I see Favreau’s "Iron Man 2."

Speaking of "Iron Man 2," Robert Downey Jr. was previously attached to star in "Cowboys & Aliens" before "Sherlock Holmes 2" forced him to drop out, while Tommy Lee Jones has been rumored to play a character named Woodrow Dolarhyde, although that could very well be the part Ford has accepted. Who knows?

Ford is coming off a pair of disappointing projects in "Crossing Over" and "Extraordinary Measures." In fact, I’ve only liked two of his movies in the past 15 years — "What Lies Beneath" and "Air Force One." I’m hoping "Cowboys & Aliens" is a return to form for the once-great actor, whose performances have gotten a little lazy of late.

The sci-fi western starts shooting this summer and is expected to hit theaters July 29, 2011. I pray it turns out better than "Wild Wild West."

Ford was last seen telling off Sacha Baron Cohen in "Bruno." He next stars as a veteran morning show host in the recently-delayed "Morning Glory," co-starring Rachel McAdams, Diane Keaton, Patrick Wilson and Jeff Goldblum. Ford had previously been set to star in "The Dying of the Light," a film directed by Nicolas Winding Refn ("Bronson") and written by Paul Schrader, although that project is now dead according to Empire Online.