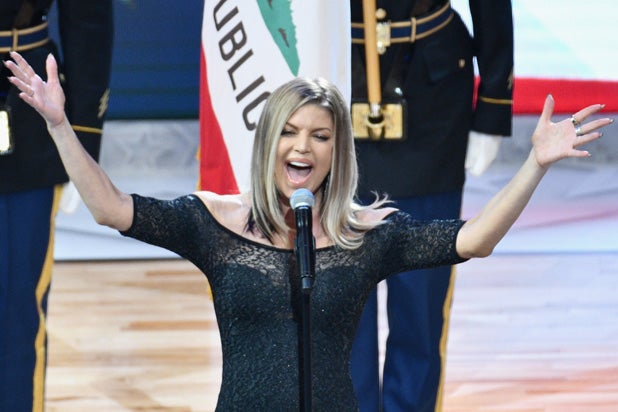 The singer’s much-maligned national anthem performance at the NBA All-Star Game earlier this year is once again drawing laughs, with the Golden State Warriors dancing and chuckling to a new remix of Fergie’s performance — and it was all captured on Steph Curry’s Instagram Friday night.

The Warriors are clearly responding to Fergie’s ex-husband, Josh Duhamel, calling forward Draymond Green a “prick” during an interview Thursday. Duhamel recalled Green being caught on camera letting out a wry smile and laughing at the All-Star Game in February as Fergie wrapped up the anthem.

Duhamel, in an interview with Fox Sports’ Kristine Leahy, said if Green was a “real man” he would’ve called Fergie to apologize.

“I was pissed off at Draymond Green, first of all, I think he owed her an apology,” Duhamel said. “I thought he was kind of a prick, just because he knew the camera was on him and he snickered about it.”

The beef appears to be dead, however. Duhamel tweeted Friday night “note to self: Think twice before you call out the champs. Well played @Warriors #NBATwitterisnojoke.” Green followed up, responding “Hahaha it was never any disrespect to her… But the challenge about to be lit G!” Seems like everyone is back to being friends.

Note to self: Think twice before you call out the champs.
Well played @warriors #NBATwitterisnojoke #sorryferg pic.twitter.com/W2ePGvEM8w