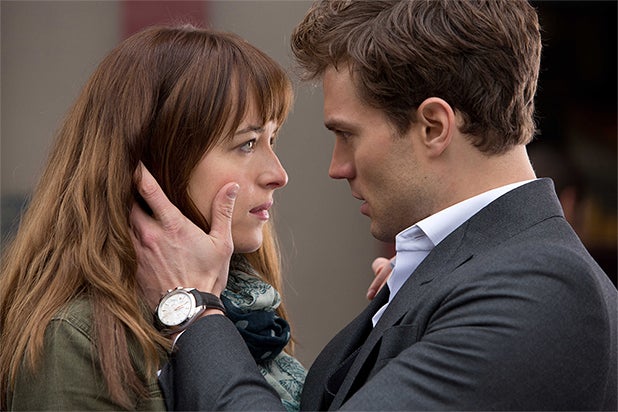 Passion has quickly cooled for “Fifty Shades of Grey,” but it’s still getting enough of moviegoers’ love to easily win in its second time around at the weekend box office.

The S&M-laced romance starring Jamie Dornan and Dakota Johnson topped Friday with nearly $8 million, which projects to a $24 million three-day total. That would be a steep 72 percent drop from its record-breaking opening weekend for the R-rated love story from Universal Pictures but not a shock, since romance movies typically fall hard in their second weeks.

The teen comedy “The DUFF” was heading for $12 million and third for CBS Films and Lionsgate Entertainment, running just ahead of Disney’s inspirational cross country tale “McFarland, USA.” Both were topping the weekend’s other wide opener, the comedy sequel “Hot Tub Time Machine 2,” which may not hit $6 million in a weak debut for Paramount Pictures and Metro-Goldwyn-Mayer Pictures.

Audiences gave very high marks to “MacFarland, USA” and “The DUFF,” which received “A” and “A-” CinemaScores respectively, but “Hot Tub” got a crummy “C-.”

Holdovers “Kingsman: The Secret Service” and “The SpongeBob Movie: Sponge Out of Water” were battling for second and will wind up at around $18 million for three days.

That’s about the same domestic total that the animated “SpongeBob” will have after three weekends, if it receives the expected boost from the kiddie crowd on Saturday and Sunday following a third-place $4 million Friday.

“Kingsman,” Twentieth Century Fox’s Matthew Vaughn-directed spy spoof starring Colin Firth, was second on Friday with $5.3 million. The R-rated adaptation of Mark Millar’s comic book  will have an impressive $70 million two-week domestic total if it stays on its current pace.

“The DUFF” took in $4.3 million on Friday and will finish with a better-than-expected $11.6 million for the weekend. That would exceed the $8.5 million production budget of the PG-13-rated ensemble comedy based on the acclaimed novel, written while author Kody Keplinger was in high school.

Mae Whitman, Robbie Amell and Bella Thorne top the cast and Ari Sandel directed “The DUFF,” which was adapted by Josh A. Cagan. CBS Films produced and Lionsgate is distributing the film produced by McG, Mary Viola and Susan Cartsonis.

“McFarland, USA” ran up $3.2 million Friday and if it stays on its current course, it will top the debut of star Kevin Costner’s last two movies, “Draft Day” and “Black or White,” which just fell out of the top ten.

Niki Caro directed and Mario Bello and Morgan Saylor co-star in the film. The true story of an over-achieving cross country team at a predominantly Mexican-American high school in California was produced for $17 million by Mark Ciardi and Gordon Gray.

“Hot Tub Time Machine 2,” directed by Steve Pink and starring Adam Clark and Scott Duke, isn’t going to manage half the $14 million that the original film opened with in March 2010.

Also Read: Despite RealD’s Struggles, 3D Is About to Go Boom

That one became a stoner-fueled DVD hit, so Paramount and MGM can hope for that with the sequel, which has a $14 million production budget.

The weekend is running about 14 percent over the comparable frame last year, when “The LEGO Movie” was posting its third straight win. It will be another positive week for the 2015 box office, which is running more than 10 percent ahead of last year and is on pace to be the biggest ever.