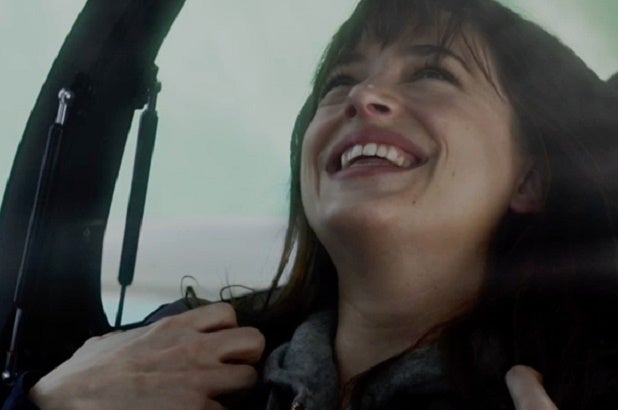 “Fifty Shades of Grey” got busy at the box office with an incendiary $30.2 million domestic debut on Friday, and the big-screen adaptation of E.L. James’ kinky bestseller is heading for a record-breaking $75 million Presidents Day weekend.

Things should get even hotter Saturday, when Valentine’s Day couples are expected to turn out in droves for the Jamie Dornan-Dakota Johnson romance from Universal Pictures and Focus Features. It’s also on pace to post the biggest overseas opening weekend ever for an R-rated movie with $158 million, after debuting at No. 1 in 56 of 57 foreign markets on Friday.

But “Fifty Shades” wasn’t the only movie setting off fireworks.

“Kingsman: The Secret Service,” the R-rated comic book adaptation starring Colin Firth as a super spy, could claim $40 million over the four days after posting a stellar $10.4 million in its Friday debut for Twentieth Century Fox. That would be about $10 million over analysts’ projections and word of mouth should be strong. Audiences gave it a “B+” CinemaScore, in line with critics who have it at 70 percent positive on Rotten Tomatoes.

It will be battling last weekend’s top movie, “The SpongeBob Movie: Sponge Out of Water,” for second place. The PG-13-rated family film brought in $6.5 million Friday, but should see a sharp rise when the kiddie crowd turns out over the long weekend and wind up around at around $40 million, too.

“American Sniper” is still going strong in its eighth week and will top the $300 million mark domestically this weekend for Warner Bros. The Iraq War saga starring Bradley Cooper brought in $3.8 million Friday and should top $20 million over the four days.

The strong showings by those four films has the weekend running around seven percent ahead of last year’s holiday, which was powered by “The LEGO Movie” and “About Last Night.”

“Fifty Shades” will beat the record for the best Presidents Day opening, the $61.3 million debut of “Valentine’s Day” in 2010. Topping the record for an R-rated opening, set by “The Matrix Reloaded” with $91.7 million in 2010, looks like a long shot now, however.

But moviegoers gave the Sam Taylor-Johnson-directed “Fifty Shades” a flaccid “C+” CinemaScore  —  in line with the weak reviews from critics that have it at 27 percent positive on Rotten Tomatoes — which means that word of mouth won’t be stellar.

Things didn’t get much better for two pricey movies that had disappointing openings last weekend.

Andy and Lana Wachowski’s “Jupiter Ascending” is looking at fifth place and a four-day total of $8.4 million. That would be a roughly 60 percent drop from its debut, and leave the domestic total for the $175 million sci-fi space opera starring Channing Tatum and Mila Kunis at $31.5 million for Warner Bros.

It’s worse for Universal’s eighth-place “Seventh Son,” The fantasy adventure starring Jeff Bridges and Julianne Moore will tally less than $4 million over the long weekend. That’s a 60 percent tumble from its soft debut and means it will be under $13 million domestically after two weeks. That’s not good for a movie that cost Legendary Pictures $95 million.

“Paddington,” the Weinstein Company’s live-action/CGI hybrid family film about the British bear, continues to hold well. It’s on course for a $4.7 million fifth week, which would be just a 19 percent drop from last week, and ups its domestic total to $64 million and its worldwide gross to $220 million.