The American dream gets a dark tweak when author Chuck Palahniuk strangles it into graphic novel format with artist David Mack, who created the “American Gothic”-inspired cover of the second issue of “Fight Club 2.”

While the iconic 1930 painting by artist Grant Wood hangs in the Art Institute of Chicago collection, the second issue of the graphic novel is coming in June to a comic book store near you.

A sequel to Palahniuk’s 1996 novel “Fight Club,” which became the cult film starring Edward Norton and Brad Pitt, “Fight Club 2” picks up nine years later with Marla (played by Helena Bonham Carter in the 1999 big screen version) and the unnamed anti-hero, who are now married in an unsettling domestic bliss.

The series is written by Palahniuk, with interior art by Cameron Stewart and colored by Dave Stewart.

“Some imaginary friends never go away,” according to the series description. “Ten years after starting Project Mayhem, he lives a mundane life. A kid, a wife, pills to keep his destiny at bay. But it won’t last long; the wife has seen to that. The time has come . . . Rize or Die.”

A sneak peek of the full cover of issue 2 is below. Click the image to view larger. 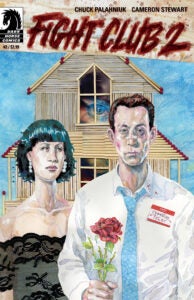 The series is published by Dark Horse Comics, home of Mike Mignola’s “Hellboy” and the “Buffy the Vampire Slayer” comic books.

The first issue goes on sale on May 27, and the second, featuring the Mack cover, will be released June 24. The Free Comic Book Day issue will be available May 2. Dark Horse is also engaging the “mayhem” services of fans in a campaign to spread the word about “Fight Club 2.” Top rabble-rousers will receive leather-bound copies of the Palahniuk’s books, the author’s fan club announced. 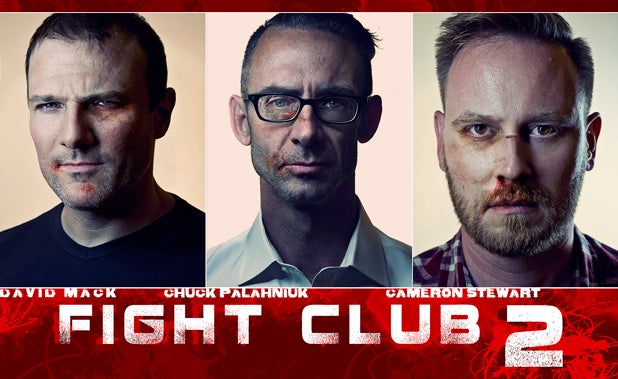 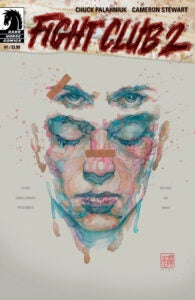 Dark Horse Comics released a look at the cover and pages from the series’ first issue in February. See the first six pages from the debut issue here.