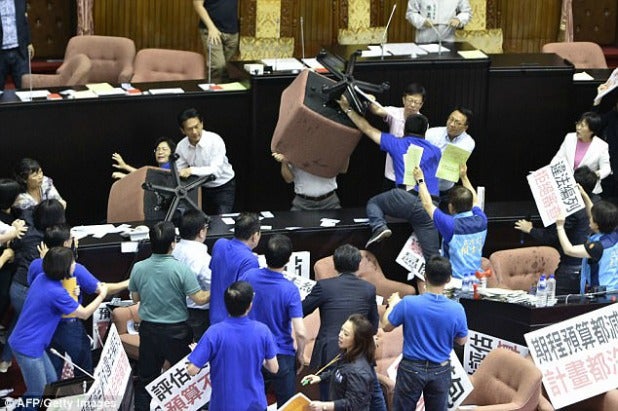 A huge fight broke out between opposing sides in Taiwan’s parliament on Friday when politicians were pushed to the ground and chairs hurled at opposing sides.

This is the second day in a row a mass fight occurred in parliament when legislators from the Nationalists criticized Taiwan’s president, Tsai Ing-wen, for budget proposals that would see major changes for light rail lines, flood control measures and green energy facilities across the island.

According to the Taipei times, five minutes into the session, the situation got completely out of control as pandemonium broke out. Politicians grabbed chairs and shoved each other — some even hurled water bombs.

One lawmaker was sent to the parliament’s clinic after falling ill during the brawl, according to the Daily Mail.

A similar smackdown between opposing lawmakers occurred in Taiwan’s parliament last year, per the Daily Mail, over proposed holiday cuts. And in April, violent protests happened outside the parliament when opponents of pension reforms physically attacked politicians and went up against police.

10 Most Brutal Kimbo Slice Fights: From Backyard to the Octagon (Videos)

Warning: Some of these videos contain graphic content that may not be suitable for all viewers