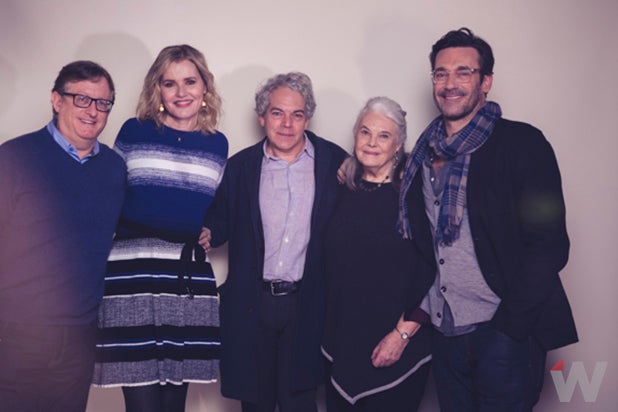 FilmRise has acquired U.S. rights to Sundance winner “Marjorie Prime” and is planning a mid-summer release and a fall awards push for star Lois Smith, the distributor announced Tuesday.

“Marjorie Prime” is a sci-fi drama that stars Smith as Marjorie, an 86-year-old widow who spends time with a holographic likeness of a younger version of her deceased husband, Walter (Jon Hamm). The hologram version of Walter provides companionship and stimulates Marjorie’s memory as she lives with dementia.

“Marjorie Prime” will be available on Amazon Prime Video later this year. The distributor is also planning an awards push centered around Smith, whose first appearance was in 1955’s “East of Eden” — and who has never been nominated for an Oscar.

Also Read: 'Marjorie Prime' Star Jon Hamm on His Fear of Being Replaced by a Hologram (Video)

“We are thrilled to announce our acquisition of this superb Sundance award-winner,” FilmRise CEO Danny Fisher said in a statement. “Michael Almereyda has created a subtle and masterly adaptation, and the performances by Jon Hamm, Lois Smith, Geena Davis, and Tim Robbins are extraordinary.”

“I’m pleased that the wave of good feeling generated by our Sundance screenings has been caught by FilmRise, and I look forward to working with them on Marjorie’s American release,” Almereyda said in the statement

“I’m very enthusiastic to be working with FilmRise on the American release of ‘Marjorie Prime,'” Singer said in the statement. “After a successful premiere at Sundance, I’m excited that the film is in good hands and will reach a wide audience.”