Lionsgate is no longer planning to release the final “Divergent” film in theaters, TheWrap has learned.

The finale, “The Divergent Series: Ascendant,” will now come out as a television movie, an individual familiar with the situation said. A spinoff series also in the works.

The deal is in the early talks phase as the studio wants the young-adult book series adaptation to finish on the small screen.

The television movie finale would be followed by a standalone television series, to be produced by the studio’s television group.

Lionsgate has not yet taken the project out to networks, but presumably their new acquisition — Starz — would get first right of refusal.

The film, which is listed as in pre-production on IMDb, has not been shot yet and it’s not yet clear whether previously announced returning cast Shailene Woodley, Theo James, Ansel Elgort and more will stay on.

Also Read: 'Allegiant' Debuts at No. 1 But Opening Is Worst Ever for 'Divergent' Franchise

The theatrical release date had been set for June 9, 2017.

The dystopian young-adult genre has slipped significantly in box office heat in recent years. “The Divergent Series: Allegiant,” the third film in Lionsgate’s once-hot “Divergent” franchise, made only $66.2 million domestically. It opened to only $29 million, significantly less than its predecessors, both of which opened in the mid-$50 million range.

Other recent attempts to launch new YA franchises like “The Giver” and “The 5th Wave” have sputtered at the box office, and interest in existing series like “The Maze Runner” and “Divergent” seems to have tapered off. 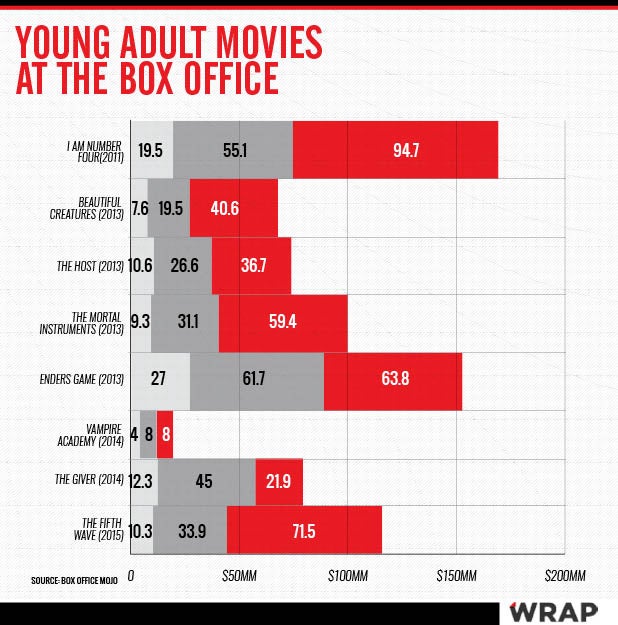 Studios and producers who rushed to grab rights to just about any book on a YA best-seller list have also been slow to greenlight any new ones.

Also Read: 'The Divergent Series: Allegiant' Is a 'Soggy Spit-Wad,' and 10 Other Disastrous Reviews

“The YA sub-genre definitely seems to be moving past its prime at the box office,” BoxOffice.com senior analyst Shawn Robbins told TheWrap in March as “Allegiant” was hitting theaters. “That’s not to say there won’t still be successful or profitable movies of a similar ilk, and there are still plenty of loyal fans out there, but studios should be paying attention to the law of diminishing returns that’s setting in.”

Disney owns half of the movies on this list, including ”Avengers: Infinity War“