Early prognosticators are projecting a massive $125 million opening for “Finding Dory” at this weekend’s box office.

While Disney’s own estimates will likely be a bit lower than that, the sequel will easily swim past the $70.3 million that “Finding Nemo” made when it opened in 2003. (Disney has not yet shared its estimates with TheWrap.)

A big opening would break a trend of lackluster sequels this year.

As of now, 16 widely released sequels have come out in 2016, and we’re not even half way through the year. Only two have outperformed their most recent predecessor: “Captain America: Civil War” and “Batman v Superman: Dawn of Justice.”

Fox’s “X-Men” sequel, Paramount’s “Teenage Mutant Ninja Turtles” followup, and Lionsgate-Summit’s latest film in the “Divergent” series have all been touched by the 2016 sequel slump — none have surpassed the opening weekend grosses of the films that came before them in their respective franchises.

The chart below compares first-weekend domestic box office returns of 2016 sequels with their most immediate predecessors, with the addition of early “Dory” estimates.

All widely released 2016 sequels appear in the chart, with the exception of “My Big Fat Greek Wedding.” (The 2002 original was a sleeper indie hit that opened in small number of select theaters, which throws a wrench in opening-weekend comparisons.) The second “Big Fat” still counts as a sequel bomb, seeing as it came in $180 million shy of the first installment. 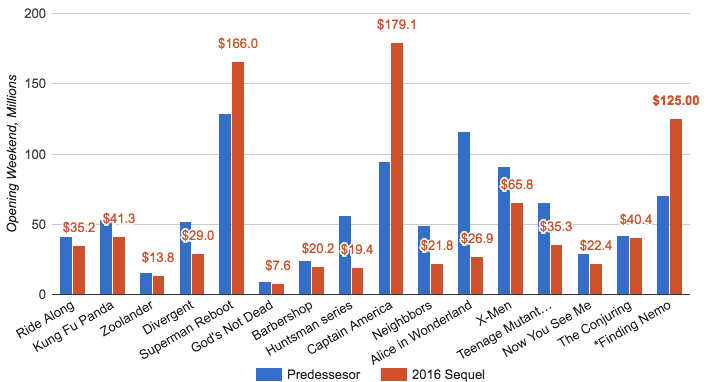 This weekend saw some reprieve from sequel sag, as New Line Cinema’s “The Conjuring 2: The Enfield Poltergeist” made nearly the same exact amount as the first one, which was a surprise hit.

“It’s not about slapping a name on a film,” one studio executive, who asked not to be named, told TheWrap. “It has to be good.”

Could that have been the case with “Now You See Me 2” — which opened last weekend to $7 million less than the first installment made in 2013?

Also Read: 'Now You See Me 2' Is an 'Excruciating,' 'Brain-Dead' Sequel, Critics Say

Disney, which has made more money at the box office than any other studio this year, has, ironically, come down with the worst case of the sequel slumps so far with the dismal debut of “Alice Through the Looking Glass.”

It bombed during its Memorial Day weekend opening, representing the most dramatic first-weekend drop for a 2016 sequel. The second “Alice” made $26.9 million domestically in its first weekend, nearly $90 million less than the $116.1 million opening of 2010’s “Alice in Wonderland.”

But Disney also experienced the complete antithesis of the phenomenon, releasing the biggest box office moneymaker of the year so far: Marvel’s “Civil War” has amassed more than $1.1 billion worldwide.

Also Read: 'Finding Dory' Is One of Pixar's 'Funniest, Most Emotionally-Rich Movies, and 5 Other Doting Reviews

“We really don’t know what’s going on,” said another film executive, who acknowledged “the sequelitis situation.”

It can’t be pinpointed to any one thing, the executive, who also wished not to be named, told TheWrap. “It’s been happening all for individual reasons. Is the audience saying, ‘I don’t want to see a sequel’? I don’t think so.”

“The law of diminishing returns for sequels used to be the generally accepted trend,” said comScore senior analyst Paul Dergarabedian, adding that “The Conjuring” sequel’s first weekend was “a winner.”

Disney-Pixar’s “Finding Dory” is sizing up to break the trend, set to obliterate “Nemo”‘s opening weekend when it opens this Friday.

But there are more sequels to come, including “Rings,” Paramount’s third installment in “The Ring” series, due out in late October.

And “Independence Day: Resurgence” arrives June 24. Without Will Smith returning (except for appearing in a photo), the film has an uphill battle to beat the 1996 original’s huge $96.1 million opening week (which was helped by a mid-week debut).

With more sequels on the horizon, including “The Purge: Election Year,” “Ice Age: Collision Course,” “Star Trek Beyond,” “Jason Bourne,” and “Bridget Jones’s Baby,” there are a whole lot more followup films that are vying to break this year’s box office trend.

Pixar has created many memorable characters over the years. Here are our picks of the best

Over the past two decades, Pixar has left an indelible mark in cinema. At its peak, it hit home run after home run, creating instant classics with memorable characters. Now that the studio is returning to its past glory with films like "Inside Out" and "Finding Dory," we ask: who is Pixar's greatest character? Read on to find out who we picked.
View In Gallery