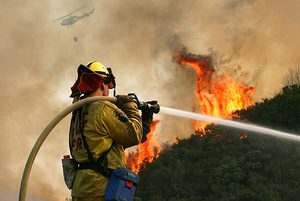 Driving up the 101 yesterday, from Los Angeles to San Francisco, was a journey through fire country. All along the Pacific Coast, clouds of smoke and ash hugged the waterline. Along 400 miles, passages of low-hanging smoke interrupted the brilliant blue of the Pacific,  through an ominously overcast Santa Barbara, and past the darkened tunnel that was Goleta. In between I emerged into the sunlight passages of the coastal Pino Noir vineyards and Pismo Beach, still unaffected. But all along the 101, the fuel for future fires was evident — dry, sand-colored scrub lining the sides of the road. There are still 1,700 fires blazing through California, with only a small percentage of them contained, according to state officials. It is likely to take until the end of the month for the fires to be extinguished. But as July stretches into August, fire fighters are going to face exhaustion. Home owners will face evacuation. And beach-goers may decide that the summer of 2008 is a time to go much further south. Yesterday, the news radio served as  running commentary to the haze floating above Highway 101: "There is no fire season anymore," said the governor’s spokeswoman. "It’s year-round." (photo: LA Times)