That giant plume of smoke to the north of you isn’t getting any smaller.

As an orange sunset began to blanket Southern California early Monday evening, the fire in the Los Angeles National Forest continued to rage out of control. As of 6 p.m., 105,000 acres, mainly brushlands that had been overgrown for decades, had been burned.

Five people who had refused evacuation orders remained trapped and were awaiting emergency airlift. Twelve thousand homes remained threatened, as did a key broadcast antenna complex sitting 5,710 feet atop Mt. Wilson, as well as the historic observatory adjacent to it.

Power lines and wireless telecommuncations infrastructure are also being imperiled by the huge blaze, known as the Station Fire. 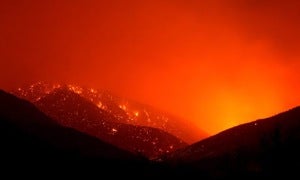 On Sunday evening, a "strike team" had been deployed to protect the antennas and the Mt. Wilson Observatory, that rests on a tall peak overlooking Padadena.

However, those crews were called off Mt. Wilson Tuesday morning for fear that they would become trapped by the blaze, which was expected to reach the area some time during the day. Firefighters continued to use airplanes to drop retardant on the antennas and observatory complex throughout Monday.

In all, broadcast antennas for 22 Los Angeles TV broadcast outlets are affected, as well as 25 FM radio stations. Dozens of technicians who service these broadcast towers were pulled off the mountain earlier.

Damage to these antennas or the power lines servicing them will not affect the majority of television viewers, who get their signals through satellite or cable services. However, those Los Angeles-area residents getting their TV and radio signals over the air would see their broadcasts reduced to static.

As for the nearby observatory, a sprawling $20 million complex that services USC, UCLA UC Berkely and a number of other insititutions, that was once the largest in the world and is known to have yielded the data that led to the Big Bang Theory.

A day after two firefighters died battling the Station Fire when their truck careened off a mountain road, the number of homes lost so far remains unclear.

However, a Monday morning news conference conducted by the U.S. Forest Service confirmed that three homes on the blaze’s northern flank in Acton had burned down overnight, while 18 domiciles on the southern edge in Tujunga Canyon were also lost.