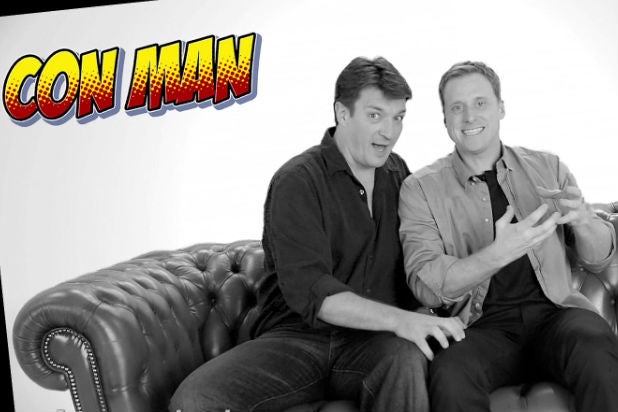 An Indiegogo campaign from actors Nathan Fillion and Alan Tudyk has broken records on the platform and across all major crowdfunding sites, generating $1.4 million in 35 hours for a new web series.

The filmmakers and “Firefly” alums are teaming up for “Con Man,” a show based on the “the personalities, luminaries, comic book stores and characters they have run into during their years in the sci-fi community and convention circuit.”

Some of the notable accomplishments for “Con Man” include: the campaign passed the $1 million mark before 12 a.m. ET on Wednesday and broke the record for all-time highest funded web series across all crowdfunding platforms. Additionally, it surpassed Spike Lee’s “Da Sweet Blood of Jesus,” a campaign that raised $1,418,910.

It’s not hard to imagine Fillion and Tudyk’s legion of fans nearly tripling the initial start-up goal of $425,000, given their social media influence. Tudyk will write, direct and star while Fillion, of “Castle” fame, will produce and play a supporting role. The fund will cover an initial run of three episodes.

“I’ve been to conventions from San Diego to Dubai and I have so many great experiences to share through the world of ‘Con Man.’ The sci-fi fans have changed my life and I want to give them a chance to see a new view of the world they built,” Tudyk said in a statement.

“Alan has, for the entire time that I’ve known him, never failed to impress me with his talent. Don’t think I’m blowing smoke here, because it kills me inside to say it,” Fillion added, “Alan’s driving, and I’m sticking my head out the sunroof screaming ‘WOOOO!’”

Further proof that fans are driving the deep pockets of “Con Man” — most of the biggest ticket donor packages are sold out. A total of four $10,000 donation slots, for instance, are sold out. Perks for that price tag include an executive producer credit on the project, a background character role and lunch with Tudyk.

On the donation page, the actors offered an honest take on circumventing conventional routes like broadcast or cable to bring “Con Man” to life.

“In show business, a network/studio could add plenty to the business of ‘Con Man,’ but at the expense of the show. Complications such as dictating what guests we may have, changing the tone of the show, going into production freezes, having a delayed release” were listed as reasons for choosing Indiegogo, as well as meeting Screen Actors Guild minimums for on-screen talent.

“Con Man” centers around the post-show life of Wray Nerely, (Tudyk) the pilot and co-star of “Spectrum,” a sci-fi series which was cancelled before it’s time and eventually became a cult classic beloved by fans. Wray’s good friend, Jack Moore (Fillion) starred in the series and has gone on to become a major celebrity, while Wray continued to struggle to find his big break. While Jack enjoys the life of an A-lister, Wray tours the sci-fi circuit as a guest of conventions, comic book stores, and lots of pop culture events. The show will explore all the weird and crazy things that happen to Wray along the way, while telling the story of a guy learning to love and embrace his fans.

Has Comic-Con left you broke? Maybe it’s time to sell off those exclusive items you picked up. TheWrap scoured eBay to find out how much 2014 Comic-Con toys, action figures and posters are going for online