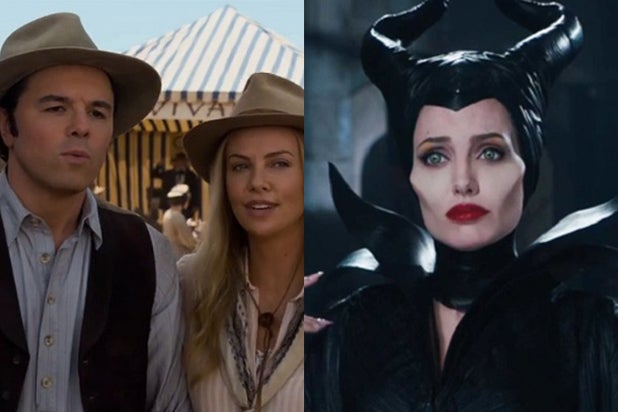 Summer’s head-to-head opening weekend battles at the box office are fun, even if the comparisons don’t necessarily make sense.

When a family movie like “How to Train Your Dragon 2,” for example, opens on the same weekend as an R-rated comedy like “22 Jump Street,” it’s not as if they’re competing for the same moviegoers. The target audiences are different, their theaters could be disproportionate, one could be in 3D — all factors that make for unfair fights,  (It’s not all about a film’s first three days either, but that’s a different story.)

See photos: 49 Summer Movies on Our Radar: From ‘Amazing Spider-Man’ to Tina Fey’s Next Comedy (Photos)

Nonetheless, if they open on the same weekend, one movie is going to come out on top and get the victor’s buzz — and one of them isn’t.

In that spirit, here’s a looking at some of the blockbuster season’s most intriguing box-office face-offs:

“Godzilla” vs. “Million Dollar Arm,” May 16
Everyone’s favorite rampaging reptile goes up against hunky Jon Hamm, the star of TV’s “Mad Men,” as a baseball scout who takes an out-of-left-field approach to finding a star by mining India’s cricket leagues. Disney knows how to market a family film, and a baseball movie in the summer makes sense. But the hordes of fanboys who mobilize for monster movies gives “Godzilla,” from Legendary Pictures and Warner Bros., a clear edge. The presence of another TV star — Bryan Cranston of “Breaking Bad” — further tips the balance in favor of the the big lizard. Prediction: “Godzilla,” in a romp

“Maleficent” vs. “A Million Ways to Die in the West,” May 30
Will moviegoers prefer to get scared silly by Angelina Jolie as The Mistress of All Evil from “Sleeping Beauty,” or laugh themselves silly with Seth MacFarlane and his cowpoke pals? Both movies have a lot going for them. Disney’s marketing machine and Jolie’s star power is a potent 1-2 punch, and this is the same young-girl target audience that made “Frozen” a blockbuster, though “Maleficent” is darker. The early buzz on “A Million Ways to Die” is positive and MacFarlane and Universal are hoping that he — along with co-stars Charlize Theron, Neil Patrick Harris, Liam Neeson, Amanda Seyfried and Sarah Silverman — can do for cowboys what he did for teddy bears with “Ted.” Prediction: “Maleficent,” but not a blowout

“22 Jump Street” vs. “How to Train Your Dragon 2,” June 13
This is another battle between a kids film and an R-rated comedy. Sony’s clearly confident in its sequel to last year’s breakout hit based on the 1987 TV show, shifting it into the heart of summer. Hits “Magic Mike,” “Wolf of Wall Street” and “This Is the End” have raised the heat index for Schmidt (Jonah Hill) and Jenko (Channing Tatum), and adding Ice Cube to the cast won’t hurt. But Hiccup and Astrid, the two main characters in DreamWorks’ animated sequel, also have turned it up since the 2010 original. The movie’s Facebook page is approaching 6 million “likes” — which is “Despicable Me 2” range. One thing we know is that Hill will be in whichever movie comes out on top — he voices Snotlout Jorgenson in “Dragon.” Prediction: “How to Train Your Dragon 2,” but both will be big.

“Hercules” vs. “Sex Tape,” July 25
Who looks better in a toga and sandals than Dwayne “The Rock” Johnson? This Paramount release will surely do better than the “Legend of Hercules,” which bombed back in January, but how high can this Brett Ratner-directed action epic go, given that its wrestling fan-heavy audience, like it cast, will be virtually all male? Sony’s Jake Kasdan-directed comedy “Sex Tape” stars Jason Segel and Cameron Diaz as a married couple who lose a film of themselves frolicking. The supporting cast includes likable stars Rob Cordry, Ellie Kemper and Jack Black, but it’s hard not to feel the concept of this film would have worked better a few years ago. Prediction: The Greek man-god narrowly, and only because the comedy isn’t about “selfies.”

“Expendables 3” vs. “The Giver,” August 15
It’s hard to imagine movies more different than these two, but that’s what makes this sort of thing fun. Harrison Ford, Wesley Snipes, Antonio Banderas and Kelsey Grammer (huh?) join Sly Stallone’s band of bad-ass geezers as they take on arms dealer Conrad Stonebanks (Mel Gibson). Three films in, the concept is getting old, but creaky is cool with this franchise, right? The Weinstein Company’s “The Giver” is a sci-fi film based on Lois Lowry’s 1993 novel about a Utopian society with no racism or sickness and a young man chosen to be the Receiver of Memories. It’s directed by Phillip Noyce (“Salt”), and stars Jeff Bridges, Meryl Streep, Katie Holmes, Alexander Skarsgard and … Taylor Swift. Prediction: Sly’s old guys, by a gray hair.