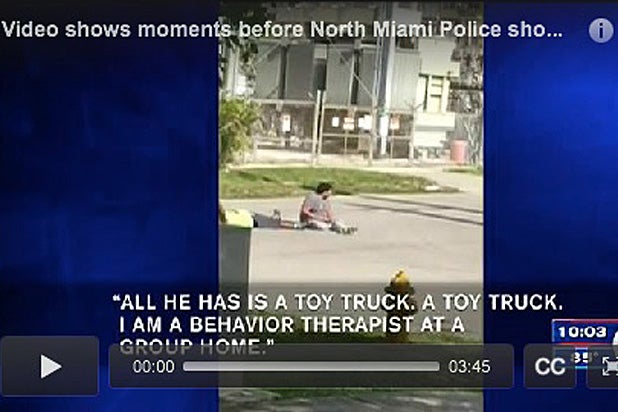 Police shot an unarmed African-American health care worker with his hands up Monday as he tried to help an autistic patient.

Charles Kinsey, of North Miami, Fla., was hit in the leg by officers while he held his hands up in a surrender position. News station WSVN obtained video on Wednesday. The shooting came after killings of and by police officers have strained race relations in recent weeks.

Kinsey is heard in the video saying of his patient, “All he has is a toy truck. A toy truck. I am a behavior therapist at a group home.” Officers seem to have mistaken the toy for a gun.

The patient had run away from a group home in the Miami suburb, and Kinsey was trying to calm him down when the officers arrived at the scene, responding to a 911 call reporting a man with a gun threatening to commit suicide.

In the cellphone footage, Kinsey is also heard telling his patient: “Rinaldo, please be still, Rinaldo. Sit down, Rinaldo. Lay on your stomach.”

Currently recovering in a local hospital, Kinsey said he told the officers they had no need for weapons.

“When I went to the ground, I’m going to the ground just like this here with my hands up,” he told WSVN. “And I am laying down here just like this, and I’m telling them again, ‘Sir, there is no need for firearms. I’m unarmed, he’s an autistic guy. He got a toy truck in his hand.

Officials in the North Miami Police Department placed the officer who shot Kinsey on administrative leave as they investigate the shooting, WPLG-TV reported. The local state attorney’s office has joined the investigation.