All this over a buck?

The battle between upstart DVD rental kiosk company Redbox and three major Hollywood studios sheds light on the pressures created by a declining DVD market compounded by a down economy.

The studios are trying to defend their shrinking DVD business, but some say their tactics are no better than corporate blackmail — and that it may prevent a much-needed change to aging DVD distribution practices.

"Redbox pays the price determined by studios to acquire DVDs," Redbox President Mitch Lowe told TheWrap in an interview. "However, once the DVD is owned by Redbox, it is our right to determine what we deem a fair price to rent. This right is protected."

Redbox charges consumers $1 to rent first-run movies from 17,000 kiosks scattered across the country. The studios say those rentals are hurting DVD sales, and should be barred for the first month of a movie’s DVD release.

The numbers tells the story. 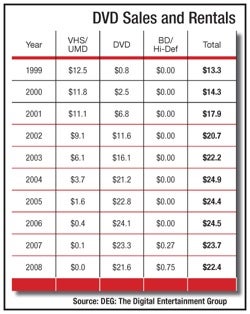 For the first half of the year, DVD sales were down 13.5 percent from the same time period last year, according to industry tracker Digital Entertainment Group.

On Wednesday, the company filed a lawsuit against Warner Home Video over the studio’s attempt to prevent the kiosks from renting the studio’s films until 28 days after a movie’s release.

This followed a flurry of legal maneuvers involving the studios and the buck-a-pop service:

– Warner Bros announced last week that come October it will deal directly with Netflix and other mail-order and kiosk companies instead of through wholesalers and, in the process, withhold product unless a shared revenue plan is put in place.

– Fox, which has also been sued, has instructed its DVD wholesalers not to sell discs to Redbox until 30 days after they are released.

The battle goes right to the financial heart of conglomerates facing battered stock prices and public pressure to make content worth keeping.

Redbox, a spin-off of McDonald’s which is owned by Bellvue, WA.-based Coinstar, says it has the right to offer consumers great prices. The sued studios claim cheap rentals of new titles erode their ability to sell them.

The company has shaken up the DVD business at a time when studios are trying to stanch the bleeding and find new ways to get people to pay for content.

But does Redbox have a case?

"The studios have the right to do business on terms that work for them," says one former studio boss that requested anonymity.

But some studios have no quarrel with Redbox, and consider any business model that promises to bring in dollars a model worth considering.

Sony and Lionsgate have signed deals. Disney and Paramount, while not having set agreements, offer up their titles as well.

The studios went through this same kind of thing years ago when company bosses once claimed that going day-and-date with their theatrical titles would cannibalize business. Of course now it’s standard practice, and box office has boomed.

So why have some studios moved forward others have passed?

"It helps to book earnings now," said the executive. "If you can put these kinds of numbers in the current quarter, it helps the perception. Whether or not this business model survives is secondary to whether they can count the money today, and some want to count that money."

As for the studios that are holding out, Redbox’s Lowe says this is nothing more than a form of blackmail.

"This is fundamentally about Redbox’s right to pursue its business with its partners, but studios like 20th Century Fox, Warner Home Video and Universal Studios would like us to charge more to rent a movie," Lowe told TheWrap.

"We receive movies the same way as everyone else. We buy them at the same price. The difference is, we have developed an incredibly efficient distribution system and have decided to pass these savings to our customers.

Still, it’s hard to argue with the fact that $1 rentals feel like they cheapen the glamour of the movies. What’s more, there’s limited space, limited titles and the presentation is reduced, often, to a box on a street corner.

Jeff Bewkes recently compared the business model to $1 movie theaters, which died out long ago due in no small part to a lack of support from the majors.

So, like everything else, it all comes down to price points and profits.

"The comfortable price point is more in the video-on-demand mode or the current Netflix and Blockbuster model" said the executive. "Charging $3.99 for a title — and then being involved with revenue sharing. There’s money to be made that way. Who’s making anything on $1?"

As for the contention that this is another example of studios not adapting to new technologies, movie kiosks have been around for a while and there have been no breakout success stories.

For its part, Redbox doesn’t have an easy fight ahead. Blockbuster’s past few years have been shaky thanks to Netflix’s Web-based convenience. Going to the store lost its appeal…and you still have to do that with Redbox, though instead of a brick-and-mortar location, it’s that drive-to street corner.

Finally, customers want choice: if Redbox loses the pending lawsuits then the lack of new titles will certainly kill its mojo…and maybe the whole operation.