Pioneering sports broadcaster Chester R. Simmons, who served as president of ESPN during the company's launch in 1979, has died. He was 81.

Simmons' family said he died in Atlanta on Thursday. The cause of death wasn't disclosed. 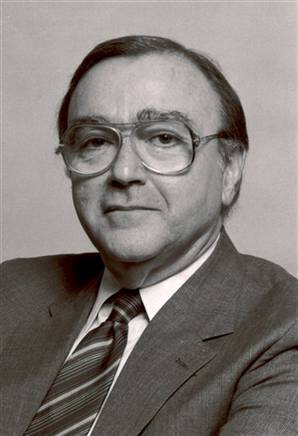 Simmons began in broadcasting in 1957 with Sports Programs, Inc., which became ABC Sports. Simmons was involved in developing "Wide World of Sports" before becoming president of NBC Sports and later ESPN. He was also founding commissioner of the USFL.

"Chet Simmons' leadership and vision in our first years were absolutely critical to ESPN's survival," said George Bodenheimer, president of ESPN and ABC Sports. "He was the only industry president to have pioneered both sports broadcasting in the late '50s and cable television in the late '70s."

"Chet did so much more than take a chance on us young people 30 years ago," ESPN anchor Chris Berman said. "What you see today would have never been possible without him. We'll miss him as a mentor and as a friend. All of us will be forever indebted to Chet Simmons."

Before going to ESPN, Simmons spent 15 years at NBC, where he was involved in utilizing instant replay and had a hand in attaining the network's major sports properties, including the American Football League, NFL, Major League Baseball, NHL, college basketball, the Rose and Orange Bowls and Wimbledon.

He joined ESPN as president and chief operating officer on July 31, 1979, just before the network's launch Sept. 7.

"There's no question that cable television sports is at the same stage right now that network sports was 15 or 20 years ago, I've lived through the evolution of sports on television, and what lies ahead for cable television is incalculable at this point," Simmons said at the time.

"I was there during the inception of ABC Sports and the rebirth of NBC Sports, and I see many similarities between those beginnings and the beginning of ESPN and 24-hours-a-day televised sports."

Among his most notable achievements were the birth and direction of "SportsCenter" on day one of ESPN; television's first comprehensive coverage of the early rounds of the men's NCAA basketball tournament; and the NFL draft telecast (both in 1980).

Simmons left ESPN in 1982 and joined the USFL, serving as the league's commissioner until January 1985. Simmons went on to serve as a media consultant to Madison Square Garden and the Marquis Group; as an adjunct professor at the University of South Carolina.

Simmons was born on July 11, 1928, in New York City, and was raised in Ossining, N.Y., and Pawtucket, R.I. He earned a bachelor of arts degree in broadcasting from the University of Alabama.

Simmons had been living in Atlanta, and Savannah, Ga., since 1986. He is survived by his wife, Harriet; four children, Pam, Jed, Pete and Nikki; and nine grandchildren.

Funeral arrangements are being completed with the Gamble Funeral Service, Inc., in Savannah.