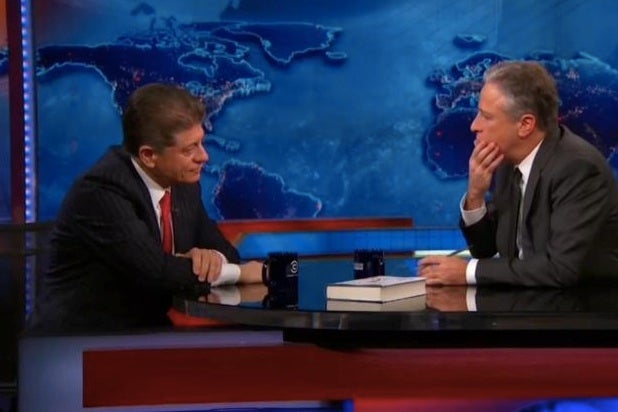 Fox News has been one of Jon Stewart‘s favorite punching bags, but a growing number of its talent are expressing their sorrow to see him leave “The Daily Show.”

In a piece for Reason, Fox News senior judicial analyst Andrew Napolitano praised the satirist for offering him something he never experiences at Fox.

“The on-air experience with Jon Stewart is unlike anything I do at Fox,” he wrote. “First, when you are Jon’s guest, you are his only guest. Second, as the only guest, you are on the show for about 15 minutes. In TV time, and by Fox standards, 15 minutes as an on-air guest is an eternity. Third, Jon spends the first 15 minutes of the show bashing you or your ideas or your employer—and he did this to me all five times I was on with him.”

Napolitano and Stewart routinely sparred on the fine line between security for American citizens and protecting citizens’ liberty—the latter being what the Judge is known to champion.

“Before Jon could question me, I told him my purpose in coming on his show was to out him as a closet libertarian,” Napolitano wrote of his exchange with Stewart. “Go ahead, Your Honor. Give it a try. This is ridiculous,” Stewart responded.

Napolitano is just one of Fox News’ hosts sad to see Stewart go: the satirist’s main friendly Fox foe—Bill O’Reilly—recently ran a montage of the best of his fights with Stewart.

The Comedy Central host will end his run as “The Daily Show” host later this year.