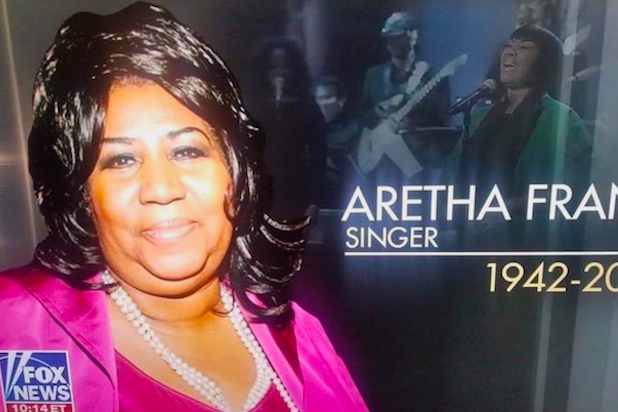 Fox News has apologized for mistakingly using a photo of Patti LaBelle in its Aretha Franklin tribute Thursday.

“We sincerely apologize to Aretha Franklin’s family and friends,” Jessica Santostefano, Vice President, Media Desk at Fox News told TheWrap in a statement. “Our intention was to honor the icon using a secondary image of her performing with Patti LaBelle in the full screen graphic, but the image of Ms. Franklin was obscured in that process, which we deeply regret.”

The image featured Franklin in the foreground and LaBelle in the background.

The error was caught by online observers who noticed that the picture at the end of the obit featured LaBelle singing “Over the Rainbow” during a “Women of Soul: In Performance at the White House” special, which aired on PBS in 2014.

You can watch the original LaBelle performance below:

People on Twitter were quick to call out the network.

Also Read: Why Aretha Franklin Mattered: It Was Never Just a Man's World When She Sang

Franklin, who rose to fame in the 1960s with hits like “Respect” and “(You Make Me Feel Like a) Natural Woman,” died Thursday in Detroit at the age of 76.

LaBelle, meanwhile, posted a tribute to Franklin on Twitter, calling her “a rare treasure whose unmatched musical genius helped craft the soundtrack to the lives of so many.”

Here are some of the reactions to Fox News’ mistake: